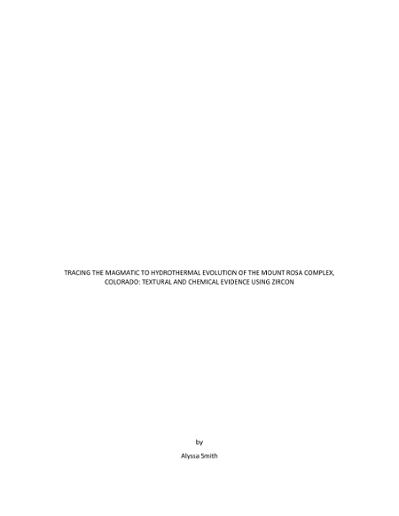 Located ~15 km west of the city of Colorado Springs, the ~1.04 Ga Mount Rosa Complex (MRC) consists of a diverse groups of peraluminous to peralkaline granitic rocks hosted in the ~1.08 Ga Pikes Peak Batholith. From oldest to youngest, the MRC comprises the following rock units: the peraluminous Pikes Peak biotite granite (PPG), fayalite-bearing quartz syenite, granitic dikes, peralkaline Na-amphibole Mount Rosa granite (MRG), mafic dikes, and type-(I) and type-(II) NYF-type pegmatites. All rock units in the MRC are highly elevated in REEs and HFSEs compared to other A-type magmatic systems. In order to better understand the magmatic to hydrothermal evolution of the enigmatic MRC, zircons from each rock unit were analyzed using transmitted light microscopy, BSE imaging, EDS spot analyses, automated mineralogy bright phase searches, SEM-CL imaging, EMPA, and Raman spectroscopy to document their textural and chemical variations across all rock units. Based on petrography and automated mineralogy, zircons were divided into 5 categories: Type 1A: euhedral early magmatic zircon, type 1B: early magmatic sieved textured zircon, type 1C: early magmatic patchy zircon, type 2: pegmatitic wallrock zircon, and type 3: hydrothermal zircon. Type 1A zircon occurs in the PPG, fayalite-bearing quartz syenite, and type-(I) pegmatites. Type 1A zircons exhibit concentric zoning and oftentimes have metamict zones. Type 1B zircon is isolated to certain areas of the MRG and is characterized by an abundance of large inclusions. Type 1C zircon is found in the granitic dikes, areas of the MRG where type 1B zircon is not found, and mafic dikes. Type 1C zircons display patchy erratic zoning and host small but abundant REE-bearing mineral inclusions. Type 2 zircons are mostly found in type-(II) pegmatite rims, and are inferred to be magmatic zircons with a hydrothermal overprint, causing unusual zoning. Type 3 zircons are found in the core of some type-(II) pegmatites, and are characterized as hydrothermal zircons that make up a complex array of vein networks. Contrary to prior suggestions, chemical and textural zircon data from all rock units within the complex suggests the peralkaline MRG is co-magmatic with the peraluminous PPG. Chemically, all zircon types display enrichment in REE and HFSE relative to mantle-derived zircons, with increasing enrichment in the younger rock units (mafic dikes, type-(I) pegmatites, and type-(II) pegmatites). Additionally, the zircons of the peraluminous granitic dikes are strikingly similar to the zircons of the peralkaline Mount Rosa granite and mafic dikes, proposing a similar origin. Enrichment in REEs and HFSEs in the peraluminous PPG relative to other mantle derived magmas suggests its origin to be enriched mantle with potential crustal contamination during emplacement. As a result, the original peraluminous melt was rich in volatiles, alkalis, REEs and HFSEs. Fractional crystallization of the melt caused the parental peraluminous melt to become enriched in volatiles and incompatible elements, resulting in the development of a peralkaline melt. The peralkaline granitic rocks differ mineralogically and can be described as a (I) early more primitive peralkaline mineral assemblage consisting of Na-Fe amphibole, albite, microcline, quartz, biotite, and sieve textured type 1B zircon and (II) a more evolved transitional peralkaline mineral assemblage with albite, microcline, quartz, F-rich biotite (siderophyllite), Na-Fe amphibole, fluorite, acicular astrophyllite, and patchy type 1C zircon. Type-(I) pegmatites, being mineralogically simple and very similar to the mineralogy of the MRG, are interpreted to represent the final melt of the (I) early primitive peralkaline melt. Type-(II) pegmatites, however, show a more evolved mineral assemblage that includes all minerals of type-(I) pegmatites, but also includes astrophyllite, monazite, and sulfides as well as complex fluorides such as cryolite, weberite, and Y-rich fluorite. Late stage aegirinization and Ca-F metasomatism is responsible for remobilizing and redistribution REEs and Zr (and other HFSE) throughout the MRC.