Peloid characterization and diagenesis of the A chalk, Niobrara Formation, Denver Basin, CO 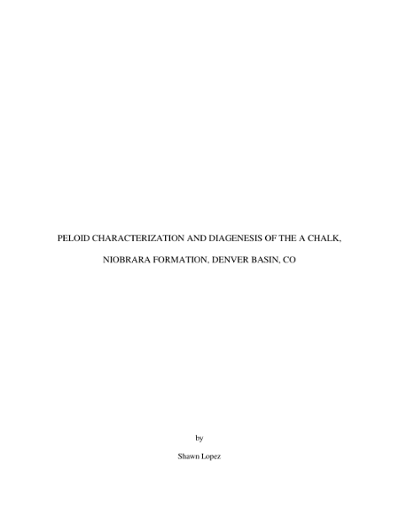 Much of the porosity in the Smoky Hill Member of the Niobrara has been attributed to micro- and nanoscale porosity in abundant, coccolith-rich peloids, hypothesized to be fecal in origin. Previous drilling in the Niobrara has primarily been focused on the B Chalk for its thickness and uniformity, while the thinner C Chalk and thinner/stratigraphically more complex A Chalk have remained untested or drilled less frequently. However, a recent study by Aydin (2017) has shown the A Chalk to have the highest porosity and permeability in the Smoky Hill Member of the Aristocrat Angus PC H11-07 core (Wattenberg Field). While the bulk of porosity in the Niobrara system is present within peloids, they have not been thoroughly characterized in the literature. Due to increased porosity/permeability and preservation of the peloidal fabric, the A Chalk is a prime candidate for a peloidal characterization study. This study involves the analysis of seven cores transecting the Denver Basin with increasing burial depth of the A Chalk. Core description, X-ray fluorescence, kerosene immersion porosimetry, thin section petrography, image analysis, scanning electron microscopy, and electron microprobe methods were integrated to explore the paleoenvironmental conditions of deposition, peloidal variances, and cement in the A Chalk. Correlating with an abundance of pyrite and a lack of inoceramids, benthic forams, and bioturbation structures, trace element data suggests the development of a varying, but persistent oxygen minimum zone throughout the Upper Niobrara. In the eastern part of the Denver Basin, the A Chalk boasts porosities exceeding 40%. However, diagenesis reduces porosity to less than 8% towards the deeper west side of the basin. Peloids were found to display increased compaction with increasing matrix and peloidal clay content, due to the more ductile nature of clays relative to calcite. However, the mechanical compaction of peloids, with burial, was found to be negligible within the scope of this study. The majority of diagenesis in the Upper Niobrara is related to the chemical compaction of calcite at grain contacts, solution seams, and microstylolites, a process which is catalyzed by the presence of clays. Image analysis shows a gradual decrease in average peloid size towards the east side of the basin, which could be indicative of peloidal grain sorting in an approximately eastward current. The aspect ratio (AR) and length trends show a dominant population of lighter-colored, ellipsoidal (1-4 AR) peloids which average 0.117 mm in length, and a minor population of darker, elongated (4-10 AR) peloids which average 0.168 mm in length. The dominant, ellipsoidal population is consistent with modern fecal pellet shapes, size, and feeding habits of copepods, a type of zooplankton, while the minor, elongated population is characteristic of inorganically-formed organo-mineral aggregates. Peloid colors are chiefly influenced by porosity, mineral and organic constituents, and microredox conditions relating to the presence of pellet membranes and internal variations in organic matter, iron, and sulfur under reducing conditions. Other peloid color variations are due to oil-staining from the generation of hydrocarbons, shallow, late-stage gypsum cement, and post-coring oxidation of pyrite. Porosity is gradually lost with burial due to the dissolution of calcite at localized solution seams, and the precipitation of calcite as overgrowths and micrite cement in the adjacent matrix and pellet pores. Micrite is also redistributed from the matrix into pellets with the degradation of pellet membranes. Membrane degradation occurs during deposition through water column disaggregation, microbial degradation, and partial coprophagy, or postdepositionally through bioturbation and diagenesis. Porosity is also lost through the formation of late-stage, authigenic gypsum cement in the shallow subsurface. However, diagenesis also offsets porosity loss with the preservation of porosity through hydrocarbon-related saturation and overpressuring, and the creation of organic matter porosity and potentially, overpressuring-related microfractures.