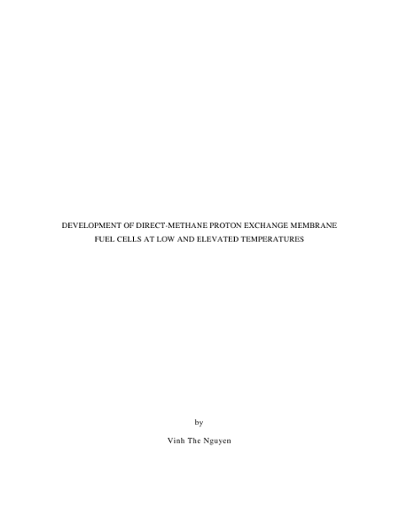 Proton exchange membrane fuel cells (PEMFCs) will be our next generation power source for transportation, stationary, and portable applications, due to their high power densities, high efficiencies, and low emissions. However, the current fuel source used in PEMFCs, hydrogen, has low compressibility and is not readily available as its production is relatively expensive. As a result, methane, a more compressible and primary constituent of natural gas, is more ideal to use as a fuel source in PEMFCs. Nevertheless, the utilization of methane for fuel cell applications with current technologies is neither efficient nor cost-effective. Methane is currently utilized electrochemically only in solid oxide fuel cells (SOFCs) that run at very high temperatures (700-1000°C) via a steam methane reforming (SMR) process. Energy loss during SMR at high temperature substantially lowers fuel cell efficiency. Therefore, operating fuel cells directly on methane at low temperatures is highly desired, and the key challenge to the direct-methane PEMFCs at low temperatures is the electrochemical activation of the methane molecule. Molecular catalysts featuring platinum complexes with ligands in the bidiazine family have shown the capability to selectively activate and oxidize the C–H bond of methane at low temperatures. These platinum organometallic complexes were covalently anchored to ordered mesoporous carbon (OMC) for electrochemical oxidation of methane in a proton exchange membrane fuel cell at 80°C. The maximum normalized power was five times higher than a modern commercial catalyst and two orders of magnitude greater than a Pt black catalyst. The observed differences in catalytic activities for oxidation of methane are linked to the chemistry of the tethered catalysts. This study helps to design future electrocatalytic systems for C–H bond activation that afford superior performance in direct-methane PEMFCs for potential commercial applications. To improve methane diffusion at the anode and avoid mass transport resistance during fuel cell polarization, several different protonic ionic liquids (PILs) were prepared. They replaced the standard perfluorosulfonic acid (PFSA) ionomer in direct-methane PEMFCs to test their performance at 80°C. N,N-diethylmethylammonium trifluoromethanesulfonate [DEMA][TfO], N,N-diethylmethylammonium nonafluorobutane-1-sulfonate [DEMA][NfO], and imidazolium trifluoromethanesulfonimide [Im][HTFSI] have shown high thermal stability and retained good proton conductivities under anhydrous conditions. Fuel cells with [Im][HTFSI] as the ionomer in the anode of a direct-methane PEMFC increased the current density five-fold and the power density three-fold higher than when the PFSA-type ionomer was used in the anode. The higher fuel cell performance resulted from the lower proton transfer and methane diffusion resistances found in the PILs. Direct-methane PEMFCs produced low and unstable current density partly due to the coalescence/agglomeration of the Pt nanoparticles during the fuel cell polarization. To reduce this problem, the carbon supports were modified so that they have nitrogen- and phosphorous-containing groups on their surface. The heteroatoms were in the form of pyridinic nitrogen, phosphate, and phosphonate functional groups at carbon edge sites, which act as ligands that tightly bind Pt nanoparticles, thus inhibiting surface diffusion and agglomeration. Moreover, these functional groups facilitate rapid proton transport between the catalyst crystallites and the ionomer, improving the intrinsic activity of the Pt, especially for methane oxidation. Fuel cells with nitrogen/phosphorus-doped carbon Pt-based catalysts at the anode attained almost double the output of the Pt-based single-site molecular catalyst. To test direct-methane PEMFCs at 160°C, an electrolyte membrane based on 12-silicotungstic acid (HPA) added, phosphoric acid (PA) doped, polybenzimidazole (PBI) polymer backbone was prepared that exhibited strong mechanical stability and excellent proton conductivity. Extensive polymer characterizations indicate that 12-silicotungstic acid inhibits water from escaping the membrane at elevated temperatures and adds more acid sites, providing additional paths for proton transport. Fuel cell polarization curves showed membrane electrode assemblies (MEAs) made of PBI/20%HPA/PA produced shallower IR slopes compared to MEAs made of PBI/PA. Direct-methane proton exchange membrane fuel cells (PEMFCs) at 160°C were tested using different types of catalytic systems at the anode. First, vanadyl pyrophosphonate (VPO), a Lewis acid, was mixed with Pt black and tested. The results showed that increasing VPO content increased the limiting current density and maximum power density of direct-methane PEMFCs. Next, 12-silicotungstic acid (HPA), a Brønsted acid, was covalently hybridized on Vulcan XC-72R, and the resultant support was subsequently deposited with Pt and tested. The presence of HPA at the anode improved CO tolerance and produced higher current and power densities than the VPO catalyst. In addition, other catalysts, such as a Pt-based single-site molecular catalyst and a nitrogen/phosphorus doped carbon Pt-based catalyst, were tested and compared with the commercial Pt/C and Pt-Ru/C catalysts. The results showed that fuel cells with a nitrogen/phosphorus-doped carbon Pt-based catalyst produced the highest tested limiting current density and maximum power density. Both a Pt-based single-site molecular catalyst and a nitrogen/phosphorus doped carbon Pt-based catalyst showed about the same methane oxidation reaction activity. Lastly, two commercial gas diffusion electrodes (GDEs) prepared at Advent Inc. and Danish Power System Inc. (DPS) were tested. Both the Advent and the DPS electrode exhibited much better fuel cell performance. Gas chromatography (GC) analysis detected CO2 as the only oxidation byproduct at the anode, and estimated about the same CO2 concentration calculated according to Faraday’s law. For the first time, direct-methane PEMFCs operated at 160°C have produced measurable current densities and high quantity of carbon dioxide byproducts, allowed mass balance the direct methane oxidation by gas chromatography analysis.