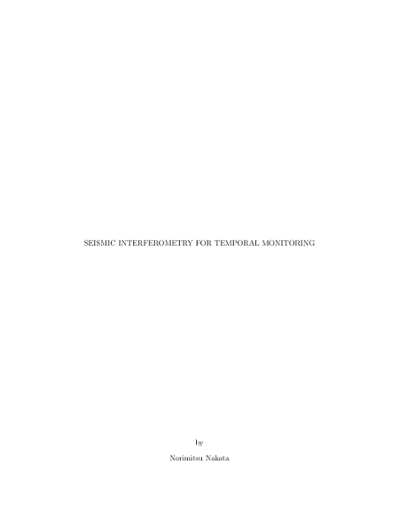 Seismic interferometry, where one computes coherency of waves between two or more receivers and averages over many sources, is a technique of signal processing to reconstruct wavefields. This technique is used in geophysics, especially exploration geophysics and seismology. After more than a half century from the first study related to seismic interferometry (although the name of seismic interferometry has been used for approximately the last 15 years), researchers have developed this technique for many aspects: using multiples for increasing illuminations, enhancement of survey areas, ambient-noise analysis, and removal of the imprint of a complicated overburden. In this dissertation, I focus on the advantages of seismic interferometry for time-lapse measurements. Measurements of temporal changes yield beneficial information of fluid flow, crustal deformation, temperature, and/or stress. Estimation of temporal changes using active sources is, however, technically and economically challenging. Because seismic interferometry reconstruct waves that would have been recorded with a repeatable active sources using only receivers, this technique is appropriate for temporal monitoring. With seismic interferometry, one obtains some advantages that include canceling the complexity of wave propagation to a virtual source, creating virtual shear-wave (S-wave) sources (active S sources are expensive), and using waves that are not usable for active sources (e.g., ambient noise and multiples). I seek applications of seismic interferometry in a variety of topics (i.e., seismology, structural engineering, and exploration geophysics), and develop and/or modify several techniques of seismic interferometry for each application. Some chapters focus on developing techniques of seismic interferometry, and other chapters aim to estimate and interpret temporal changes with the developed techniques. For passive seismic sources, deconvolution-based seismic interferometry has better repeatability than crosscorrelation-based interferometry. Also, I can estimate attenuation of media with deconvolution interferometry using the amplitude decay of deconvolved waveforms. In higher-dimensional elastic cases, deconvolution interferometry allows me to obtain PP, PS, SP, and SS reflected waves without any unwanted crosstalk of P and S waves. Higher-dimensional data are more challenging for seismic interferometry, and I employ techniques such as wavefield decomposition, multi-dimensional analysis, time windowing, and time reversal to improve deconvolved waveforms obtained from earthquakes. The main discoveries in the seismological applications in addition to the techniques are that I successfully estimate near-surface S-wave velocities and azimuthal anisotropy all over Japan with deconvolution interferometry using earthquake data, that the velocities in the near surface decrease when large earthquakes occur, and that S-wave velocities at the soft-rock sites negatively correlate with precipitation. Using interferometry, I find that the 2011 MW 9.0 Tohoku-Oki earthquake significantly changed near-surface S-wave velocities and S-wave splitting in Japan. In the applications of structural engineering, the velocities of traveling waves in a building estimated from earthquakes vary grater than those in the near surface because the response of the building often includes nonlinearity caused by the shaking of the building itself. I can estimate linear responses of the building with ambient-noise data, and nonlinear and linear mixed responses from earthquake data.