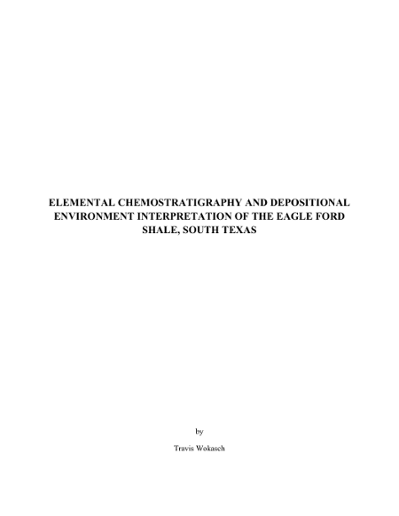 The Cretaceous Eagle Ford Shale (EFS), located in south Texas, is one of the latest up and coming unconventional shale plays in North America. It extends from the US/Mexico border in west Texas, to east Texas just west of Louisiana. The Eagle Ford has been long identified for its excellent source rock characteristics, and especially as a source for hydrocarbons in the Austin Chalk (among other formations). However, since the emergence of other North American unconventional shale plays (e.g., the Bakken Fm. in the Williston Basin), operators have begun focusing on the EFS as a potential reservoir. Petrohawk drilled the first well to produce from the EFS in 2008 and since then, production has been dramatically increasing, and its reserves potential are known throughout the industry. The Eagle Ford Shale consists of a mixture of marlstones and limestones that range in abundance and thicknesses throughout its vertical and lateral extent. Its depositional environment is interpreted to be a marine shelf margin. The EFS is underlain by the Buda Limestone and is overlain by the Austin Chalk. Difficulties with core and well-log correlations in the Eagle Ford are common because of similarities in visual appearance and log character. Recent studies of other shale plays (Marcellus, Vaca Muerta, Niobrara, Haynesville, among others) demonstrate that elemental chemostratigraphy can aid with well-to-well correlations, and can be used to interpret depositional environmental proxies. For this study, two cores and associated cuttings (for one of the cores) were analyzed using the Bruker-Tracer III-SD ED-XRF instrument to determine elemental concentrations. Cores and cuttings were provided by Statoil and therefore, well names, locations, and depths were not given in this study for data sensitivity reasons. The cores included lithologies both above (Anacacho and Austin Chalk) and below (Buda) the EFS to determine formation boundaries. Within the EFS, five chemostratigraphic zones were identified using elemental concentrations and depositional environment proxies, coupled with core descriptions. The zones were correlated from core to core to show that although some minor differences were present, correlations were possible using elemental concentrations. Correlations between core and cuttings from a single well were also performed. Results showed that cuttings do not resolve fine-scale trends elemental variations, but overall major trends were identified and correlated between the core and cuttings. Depositional environment proxies identified using elemental concentrations included those related to detrital sediment input and paleoredox conditions. Detrital input was interpreted using various ratios of Ti, Si, Al, Zr and Nb to identify coarsening-upward and fining-upward sediment successions. Such chemostratigraphic relationships represent changes in clay-sized particles (Al and Nb), relative to coarser-grained sediments (incorporating Si, Ti and Zr) associated with detrital sources. This study suggests that the EFS cores were not significantly comprised of detrital sediment. Paleoredox conditions were interpreted for the EFS from trace metal enrichment factors. Analysis showed that bottom-water oxygenation conditions at the time of deposition varied between suboxic and anoxic/euxinic. Suboxic conditions were predominant in the lower EFS, and anoxic/euxinic conditions existed in the upper EFS, and were most likely related to the Cretaceous Oceanic Anoxic Event II. Positive covariance between total organic carbon (TOC) and molybdenum (Mo) concentrations has been described and detailed in numerous papers (e.g., Sageman et al., 2003; Algeo and Lyons, 2006; Brumsack, 2006; Tribovillard et al., 2006; Algeo et al., 2007; Algeo and Rowe, 2012). The present study also showed that the EFS demonstrates the same positive covariance between TOC and Mo. Total organic carbon was calculated using Mo concentrations obtained by ED-XRF analysis to try and predict areas of higher TOC values. Companies have typically been producing from the lower EFS because of its high marlstone abundance, a lithology recognized as the principal source for organic matter. However, this study shows that the middle to upper section of the EFS could potentially represent a more productive zone. The upper section contains high TOC values (6-8 wt.%), calculated from Mo concentrations, and also has a higher abundance of limestone beds that aid in increasing the brittleness factor for hydraulic fracturing. Therefore, this section of the EFS has the potential to be a better target zone for companies producing in the EFS.