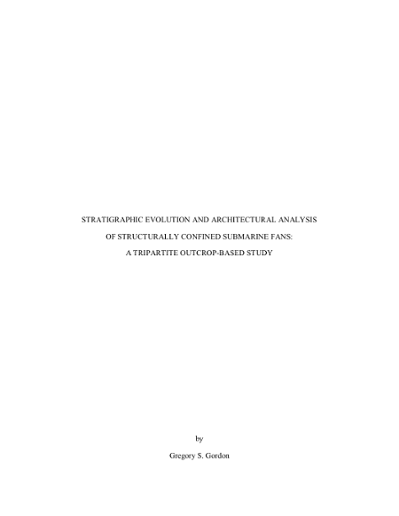 Structurally confined and ponded turbidite systems can serve as prolific hydrocarbon reservoirs, as well as important records of relative sea-level fluctuations, sediment transfer from non-marine environments to the deep sea, and tectonic episodes. Outcrop studies of these depositional systems yield sub-seismic levels of sedimentologic and stratigraphic detail. This dissertation comprises outcrop-based studies from two different structurally confined, distributive submarine fans: the Eocene Guaso I turbidite system, Ainsa basin, Spain, and the Miocene upper Modelo Formation, eastern Ventura basin, California. In Chapter 2, geologic mapping, paleocurrent measurements, architectural analysis, and correlation of stratigraphic columns document that the ponded Guaso I turbidite system was fed by westward- and northwestward-oriented channels currently exposed in the Southeast (Updip) Field Area. The oldest channels in this area longitudinally transfer to lobes on the interpreted basin floor, in the Northwest (Downdip) Field Area. The lobes are overlain by a mixed association of channels, lobes, and MTDs that contain a wider variance in paleocurrent values, indicating that the system became more distributive through time. Further, these observations reveal an increase in architectural diversity and compensational stacking of elements through time. These patterns are attributed to an increase in depositional area, and a decrease in accommodation relative to sediment supply (A:S), as the bowl-shaped basin filled. Isopach mapping reveals a prominent thick, which nearly coincides with the depositional axis of the Guaso I. Proximally, this thick comprises a mass-transport complex, as well as channels and mudstone sheets. On the basin floor, the thick is largely due to a significant succession of high-reservoir-quality sandstone. A geometric model presented herein relates reservoir connectivity and compensational stacking to effective area of deposition. The subject of Chapter 3 is the submarine channel-lobe transition zone (CLTZ), the region on a submarine fan that marks the interface between updip channels and downdip lobes. At the scale of an individual architectural element, the CLTZ governs sandstone connectivity between a channel and a lobe, and it serves as the link between locally confined and unconfined conditions for sediment gravity flows that build the submarine fan. Outcrops of the Guaso I turbidite system of Ainsa basin, Spain, include a continuous, ~4-km-long, paleocurrent-parallel transect through a channel-lobe element. Key longitudinal changes across the CLTZ in this depositional system are: thickening of the element in a downcurrent direction, due to oldest bedsets of the proximal lobe that thin and pinch out completely onto the erosive lower contact in an upcurrent direction; a basinward decrease in the amount of erosion at the base of the element; basinward decreases in intra-element erosion and amalgamation surfaces; sandstone continuity from the updip channel to the downdip lobe; a base-of-slope depositional angle of ~2°, based upon stratigraphic thickness measurements. Point counting and grain-size analyses document that sandstones of the CLTZ and the lobe are generally finer-grained and better sorted than channel sandstones. This is interpreted to be due to different combinations of depositional processes operating in the locally confined (channel) domain and the unconfined (CLTZ and lobe) domain. A four-stage sequential model that describes the stratigraphic architecture and evolution of a channel-lobe element is presented herein. Results of this study have important implications for reservoir and fluid-flow modeling in distributive channel-lobe systems. Chapter 4 is a study of the stratigraphy, paleogeography, and depositional controls of the upper Modelo Formation. Outcrops of this depositional system represent a longitudinal transect through a fault-controlled deepwater depositional system, from proximal structural terraces, through a submarine canyon, to the basin floor and basin margin. This study area is divided into three regions based on geographic location, stratigraphic character, and interpreted paleogeographic environment: Region 1 (Feeder System), Region 2 (Proximal Basin Floor), and Region 3 (Medial-Distal Basin Floor). Region 1 contains syndepositionally active normal faults (e.g., Devil Canyon fault) near the proximal basin margin; these faults are associated with abrupt changes in depositional environments, lithofacies associations, paleobathymetry, and stratigraphic thickness. The submarine canyon was an area of bypass, and it has a low net-sandstone content. Isopach maps reveal that gross thickness is greatest near the interpreted canyon mouth. In Region 2, a proximal-basin-floor fairway located immediately basinward of the canyon contains the highest sandstone content in the basin. In Region 3, gradual changes in proportions of lithofacies associations result from subtle variations in the gradient of the basin floor near the distal basin margin, as interpreted from the isopach map. In this area, channel complexes comprising structureless, amalgamated sandstone overlie thin-to-medium bedded, "dirty" sandstones deposited at the lobe fringe. This upward architectural pattern is interpreted to result from an outwardly expanding depocenter through time.