Combinatorial development of Cu₂SnS₃ as an earth abundant photovoltaic absorber 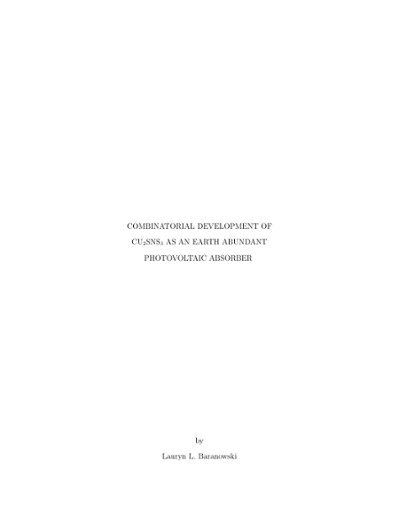 The development of high efficiency, earth abundant photovoltaic absorbers is critical if photovoltaics are to be implemented on the TW scale. Although traditional thin films absorbers such as Cu(In,Ga)Se2 and CdTe have achieved over 20% device efficiencies, the ultimately scalability of these devices may be limited by elemental scarcity and toxicity issues. To date, the most successful earth abundant thin film absorber is Cu2ZnSn(S,Se)4, which has achieved 12.6% efficiency as of 2014. However, chemical complexity and disorder issues with this material have made the path to higher efficiency CZTSSe devices unclear. As a result, many researchers are now exploring alternative earth abundant absorber materials. In this thesis, we apply our "rapid development" methodology to the exploration of alternative photovoltaic absorbers. The rapid development (RD) methodology, consisting of exploration, research, and development stages, uses complementary theory and experiment to assess candidate materials and down-select in each stage. The overall result is that, in the time span of ~2-3 years, we are able to rapidly go from tens of possible absorber materials to 1-2 working PV device prototypes. Here, we demonstrate the RD approach as applied to the Cu-Sn-S system. We begin our investigation of the Cu-Sn-S system by evaluating the thermodynamic stability, electrical transport, electronic structure, and optical and defect properties of candidate materials using complementary theory and experiment. We find that Cu2SnS3 is the most promising absorber candidate because of its strong optical absorption, tunable doping, and wide stability range. Our other candidate compounds suffer from serious flaws that preclude them from being successful photovoltaic absorbers, including too high experimental conductivity (Cu4SnS4), or poor hole transport and low absorption coefficient (Cu4Sn7S16). Next, we investigate the doping and defect physics of Cu2SnS3. We identify the origins of the changes in doping in sputtered cubic Cu2SnS3 thin films using combinatorial experiments and first-principles theory. High S chemical potential during deposition decreases the enthalpy of formation of Cu vacancies, which are the dominant acceptor defect in Cu2SnS3. Unexpectedly, under Cu-rich conditions, alloying with an isostructural (cubic) metallic Cu3SnS4 phase occurs, causing high levels of p-type doping. Both of these effects lead to undesirably high electrical conductivity, thus Cu2SnS3 films must be grown both S- and Cu-poor in order to achieve moderate hole concentrations. To understand the effects of structural disorder on the transport properties in Cu2SnS3 we develop synthetic techniques to control this disorder, and observe improvements in the majority carrier (hole) transport. However, when the minority carrier (electron) transport was investigated, minimal differences were observed between the ordered and disordered Cu2SnS3. By combining these results with first-principles and Monte Carlo theoretical calculations, we are able to conclude that even ostensibly "ordered" Cu2SnS3 displays minority carrier transport properties corresponding to the disordered structure. The presence of extended planar defects in all samples, observed in TEM imaging, suggests that disorder is present even when it is not detectable using traditional structural characterization methods. Lastly, we attempt to integrate our Cu2SnS3 films into photovoltaic devices, which requires translating our growth techniques to conductive substrates. We survey a wide range of possible conductive substrates, but are not able to find a suitable back contact for Cu2SnS3 device integration, due to issues such as secondary phase formation and delamination. From a survey of successful Cu2SnS3 device literature, we are able to conclude that the issue may lie with our binary sputtering method in which the ternary compound formation and the film growth occur simultaneously. At the conclusion of this study, we eliminated Cu2SnS as an absorber candidate for future development. However, the two main issues we encountered (eliminating structural disorder and difficulty growing on conductive back contacts) may both be related to our binary sputtering technique. We expect that interest in Cu2SnS3-based photovoltaics will continue to grow, and that further scientific understanding may shed light on our particular difficulties. In the future, the RD methodology has the potential to greatly accelerate the discovery and development of non-traditional thin film absorbers, and may enable high impact material breakthroughs.