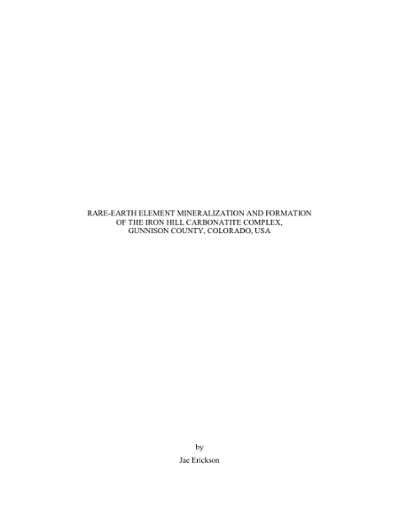 The Iron Hill carbonatite complex is located in the Powderhorn district in Gunnison County, Colorado, USA, roughly 35 km south-southwest of the city of Gunnison. The complex consists of a ringed series of silica-deficient alkalic igneous rocks with a carbonatite stock at the center. The genesis of Rare Earth Element (REE)-enriched igneous complexes like Iron Hill is contentious, and the processes involved with REE enrichment at these complexes are poorly understood. The complex is one of the largest known niobium and titanium endowments in the United States and contains significant amounts of light REEs and thorium. The igneous rocks of the Iron Hill complex intruded Proterozoic granite, syenite, and metamorphic country rock roughly 600 million years ago. From oldest to youngest, the major rock types found at the complex are pyroxenite, uncompahgrite, ijolite, nepheline syenite, and an ankeritic dolomite carbonatite stock. Carbonatite dikes, as well as jasper, limonite-barite, orthoclase-quartz-thorite, and fluorite-quartz veins are present. All major lithological units at Iron Hill are enriched in REEs, including a halo of intense fenitization within the surrounding country rock. This study aims to further our understanding of the geologic processes involved with carbonatite genesis and the formation of REE-bearing minerals at complexes like Iron Hill. The pyroxenite of the Iron Hill complex consists primarily of augite, with lesser amounts of biotite, phlogopite, perovskite, ilmenite, aegirine, fluorapatite, sphene, and magnetite. At least three subunits have been interpreted to occur, including a coarse-grained biotite and magnetite-rich pyroxenite, a perovskite and apatite-rich pyroxenite, and a melanite garnet (Ti-andradite)-rich pyroxenite. The uncompahgrite is composed of melilite-group minerals and diopside, with lesser amounts of melanite garnet, magnetite, apatite, and perovskite. The ijolite unit consists primarily of medium-grained augite and nepheline, with lesser amounts of biotite, apatite, magnetite, ilmenite, and melanite garnet. The nepheline syenite is dominantly composed of perthitic microcline, with lesser nepheline, aegirine-augite, biotite, magnetite, and ilmenite. The carbonatite stock ranges from coarse to fine grained, and is dominantly composed of ankeritic dolomite, with lesser aegirine, potassium feldspar, hematite, biotite, fluorapatite, rutile, barite, calcite, and quartz. On the basis of textural relationships, pyroxene is interpreted to have formed very early in the crystallization sequence and is therefore appropriate for recording the parental melt evolution. The mineral chemistry of pyroxene reveals a continuous chemical trend within the uncompahgrite, ijolite, nepheline syenite, and carbonatite units. This trend is visible in decreasing Ca/Na and Mg/Fe ratios, as well as a continuous trend in end-member composition. However, the pyroxenite unit does not fit this trend, implying that the major intrusive units, except for the pyroxenite, may have originated from a single parental magma body and formed due to crystal fractionation. The trace element chemistry of early pyroxenes and the presence of carbonate melt inclusions within the nepheline syenite suggest liquid-liquid immiscibility likely played a role in the later stages of the complex's genesis. Six species of REE-bearing minerals have been identified: apatite, bastnaesite, parisite, synchysite, monazite/rhabdophane, and ancylite. The distribution of REE-bearing mineral phases, alteration mineral associations, and complex cathodoluminescence properties of early apatite crystals reveals a complex alteration history within the intrusive units as well as the surrounding fenite.