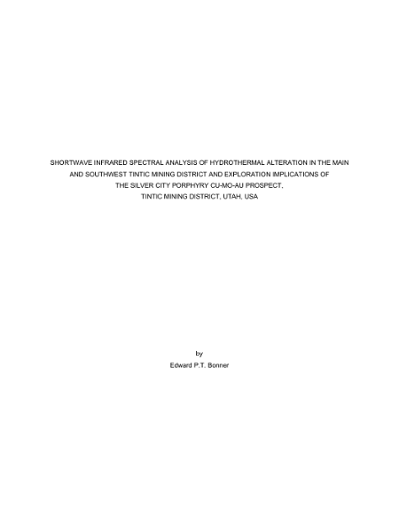 The Main subdistrict of the Tintic Mining District located approximately 65 km south of Rio Tinto’s Bingham Mine, near Salt Lake City, Utah, has historically produced ~12.9 Mt of ore (Au, Ag, Cu, Pb and Zn) principally from Pb-Zn-Ag rich carbonate replacement deposits (CRD) and some Cu-Au rich fissure vein deposits. However, the causative intrusion, which may have formed a potential porphyry copper deposit, has never been identified. The Silver City Prospect area is situated on the southern edge of the Main subdistrict and the northern edge of the Southwest subdistrict and hosts multiple northeast trending fissure vein deposits. Shortwave infrared (SWIR) spectral studies on outcrop, drill core and rock chips from the prospect area has been used to map alteration assemblages of minerals containing OH-, H2O, NH4+, and CO32-, and delineate additional zoning patterns based on subtle shifts of specific spectral absorption features, in a three-dimensional space. The prospect contains many known alteration assemblages, ranging from sodic-calcic and skarn to argillic. The spectral study delineated white mica crystallinity gradients, used as a proxy for temperature, and spectrally-inferred geochemical variations of some minerals, such as Fe-Mg proportion in chlorite, Na-K proportion in alunite, and Na-K-(Fe ± Mg) proportions in sericite. These zoning patterns are used to vector to hydrothermal hotspots and identify relationships between clay speciation, igneous phases and metal distribution. Petrography and X-Ray Diffraction (XRD) analyses were used to confirm the phyllosilicate minerals identified from spectral data, while Scanning Electron Microscopy (SEM), involving Back Scatter Electron (BSE) and Electron Dispersive Spectroscopy (EDS), was used to simultaneously validate the SWIR mineral identifications and semi-quantitatively verify major-element geochemical compositions inferred from the spectral data. Such validations have confirmed the minerals identified in SWIR and the inferred major-element geochemical compositions. The research identified three high-temperature alteration zones at surface in the Silver City Prospect area, [1] around the Lucky Boy prospect in the Ruby Hollow valley, [2] along the Dragon Valley fault, east of the Martha Washington mine, and [3] at the intersection of the Dragon Valley fault and the Black Jack lineament. The three zones are characterized by pervasive quartz-sericite-pyrite (phyllic) alteration and moderate to high vein density, plus higher white mica crystallinity values and lower Al-OH values. They are interpreted to be zones where higher temperature and acidic hydrothermal fluids circulated, confirming previous hypotheses and highlighting new potential hydrothermal centers which were not previously hypothesized. These zones are coincident with outcropping porphyry dikes of the Silver City stock, anomalous soil geochemistry in Cu, Au, and Mo, and strong chargeability anomalies at depth. The highest Cu concentrations at surface, in the southeastern quadrant of the Silver City Prospect area, are also coincident with a wide zone of high white mica crystallinity and low Al-OH values at depth. Although this wide subsurface zone is not all mineralized, the historic reverse circulation (RC) drill hole, STR-26, directly below the anomalous surface expression, has the highest Cu and Au concentrations in the prospect (averaging 0.13% Cu and 0.08 g/t Au over 165 m from 220 m depth). The drill hole coincidentally intersects similar porphyry dikes of the Silver City stock than observed at surface. The research further validates the use of SWIR spectroscopy as a fast and cost-effective way to confidently identify and spatially delineate phyllosilicate, sulfate and carbonate minerals in the field, such as sericite-, and kandite-group minerals, as well as pyrophyllite, diaspore, chlorite, biotite, phlogopite, serpentine, tremolite, alunite, jarosite, calcite and dolomite. Hotspots inferred from more acidic, Na-rich mineral geochemical variations (with lower Al-OH values) and ‘hotter’, high white mica crystallinity values in the spectral data are closely associated with metal distribution in the Silver City Prospect area. This further demonstrates the usefulness of SWIR spectroscopy as a potential deposit-scale vectoring tool. The research has produced a three-dimensional alteration model and thermal map, that can be integrated into the Silver City Cu-Mo-Au porphyry prospect geologic model.