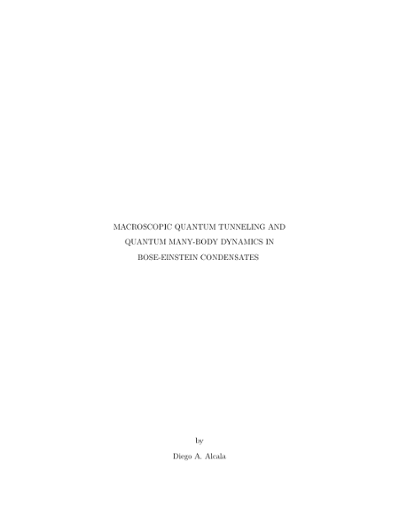 Quantum mechanics revolutionized the previous century, not only in technology with lasers and semiconductors but also our fundamental view of the world with Bell's inequality and entanglement. Quantum tunneling was the first experimental verification of quantum mechanics, by solving the mystery of radioactive decay, that a particle can escape the nucleus without sufficient energy to overcome the classical energy barrier. In this century, many-body quantum mechanics is bringing about a second revolution, with the possibility of quantum simulators, quantum computers, and a deeper understanding the nature. However, in order to fully harness the power of these systems, a detailed understanding of many-body effects is required, such as fluctuations, correlations, and entanglement. In this thesis, we seek to understand these observables in the context of macroscopic quantum tunneling. We quantify the macroscopic quantum tunneling dynamics, showing how interactions alter tunneling and quantum phase transitions modify non-equilibrium dynamics, providing a road maps of future experiments. The first experimental realization of mean-field interactions producing non-exponential decay of a tunneling Bose-Einstein condensate has been achieved. We develop an effective semi-classical model which accounts for the repulsive atom-atom interactions via an additional mean-field potential. This captures the 3D quantum tunneling via classical oscillations in an effective 1D trap and tunneling through a barrier with time-dependent height due to mean-field interactions. Mean-field treatments work well for Bose-Einstein condensates with negligible many-body effects, such as fragmentation, depletion, and fluctuations away from the mean. We show how a Bose-Einstein condensate with non-negligible fragmentation and depletion can be described with a renormalized mean-field. This suggest mean-field models are more widely applicable than previously thought, and that many-body physics may be hiding in such experiments and systems. Next, we explicitly look at the dynamics of many-body tunneling from a meta-stable trap, described by the Bose-Hubbard Hamiltonian in the superfluid quantum phase. The many-body physics are simulated using matrix product state methods, which allow exploration of lowly-entangled dynamics via data compression methods, and can calculate a wide range of quantum observables, like number fluctuations, correlations, and entanglement entropy. We compare many-body and mean-field dynamics, explicitly showing many-body tunneling times converge to mean-field tunneling times with increasing number of atoms in the system. We find rich dynamics with different time scales for the escape time, fluctuations, and quantum entropy in the system. With a firm grasp on the superfluid dynamics in the Bose-Hubbard Hamiltonian, we turn our attention to the superfluid to Mott insulating quantum phase transition, and understanding how the initial quantum phase alters macroscopic quantum tunneling. We examine this for both the double-well and quantum escape systems. We find that the dynamics of tunneling are strongly dependent on the quantum phase of the ground state. Qualitatively, the superfluid regime has wave-like dynamics, while the Mott regime has particle-like dynamics, and near the critical point there is a mixture of the two. The dynamics of many-body observables, fluctuations and correlations, have distinct signatures of their quantum phases, fingerprints pointing to the quantum phase transition. Finally, we provide a road map for future macroscopic quantum tunneling experiments, in particular for two accessible trap configurations in both semi-classical and strongly interacting regimes. Using a semi-classical method, we study the gross features of macroscopic quantum tunneling in symmetric offset Gaussian barriers, and a linearly ramped Gaussian barrier. Because the tunneling probability depends exponentially on the barrier area, large, heavy, or many interacting atoms can have tunneling rates too slow to be experimentally viable. We show how to overcome this time-scale issue, quantifying the time and length scales regarding macroscopic quantum tunneling of Bose-Einstein condensates of rubidium, lithium, and sodium, deriving scaling laws for the various trap parameters; the experimental ``knobs''. Scaling laws clearly demonstrate when oscillations in the well or tunneling probabilities dominate. We find the emergence of mean-field islands inside the traps, resulting in multiple oscillations. In the strongly interacting regime, preliminary evidence is provided for pulsed and continuous-wave regimes of a correlation-based atom laser utilizing macroscopic quantum tunneling in both barrier and interaction control.