Impact of synthetic and natural surface-active components on hydrate agglomeration, The 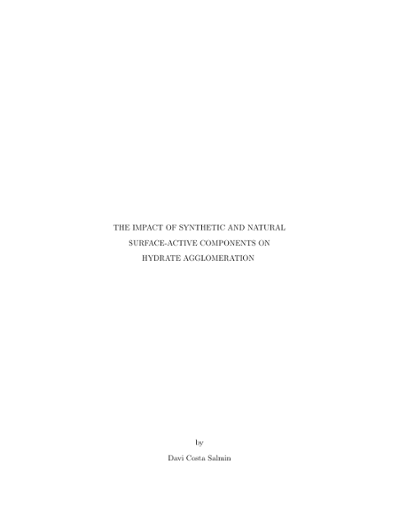 Gas hydrates present a major flow assurance challenge due to the relatively fast timescales at which they can form, agglomerate, and plug a flowline. Thermodynamic inhibitors (THIs) are a common strategy for preventing hydrate formation. However, THIs can be economically prohibitive as the water content (WC) in the flowline and its seawater depth increase. Therefore, there is a growing interest in the use of alternative hydrate management strategies, such as the injection of synthetic anti-agglomerants (AAs), which require considerably lower concentrations than THIs to avoid a hydrate plug. AAs do not prevent hydrate formation, but instead prevent hydrate agglomeration and allow hydrates to flow as a non-interacting slurry in oil and gas subsea flowlines. In some instances, the formation of a hydrate plug may be avoided through naturally occurring anti-agglomerants found in select crude oils, denoted non-plugging oils. Non-plugging oils are economically attractive since they can reduce or even eliminate the need for other hydrate avoidance or management strategies (e.g., synthetic AAs and THIs), thus significantly lowering capital and operational expenditures. Natural hydrate anti-agglomeration has been linked to polar fractions found in crude oils (e.g., asphaltenes). However, the fundamental parameters that control the manifestation of the non-plugging behavior are not well understood. This thesis provides an exploratory/scoping study to better understand the interactions between the asphaltene fraction of crude oils and natural gas hydrates. In this thesis, it shown that the non-plugging behavior of crude oils can be dependent on the asphaltene aggregation state. For instance, if asphaltenes were induced to be solubilized into the bulk oil phase, the non-plugging behavior was significantly diminished. However, when the formation of surface-active colloidal asphaltenes was induced, gas hydrate agglomeration was avoided. The asphaltene aggregation state in high-pressure tests was inferred from low pressure emulsion stability tests. Furthermore, the non-plugging potential of different crude oils was quantified and correlated to the polar functionalities found on their asphaltene fraction using Fourier Transform Infrared Spectroscopy (FTIR). Tests indicate that the asphaltene aggregation state and crude oil chemistry are key parameters for pronounced hydrate non-plugging behavior; however, other parameters can also have a significant impact, such as the water-in-oil emulsion characteristics. These results are of interest as they could serve as an initial step to enable the assessment of the hydrate non-plugging tendency of a crude oil through a simple analysis method (e.g., FTIR). These new findings could help the implementation of novel hydrate management strategies that can reduce or eliminate the need for external interventions, and hence minimize capital and operational expenditures. This thesis provides insights into the impact of the asphaltene aggregation state and asphaltene chemistry into natural hydrate anti-agglomeration. These findings are helpful to better understand the fundamental parameters that control hydrate natural anti-agglomeration, as well as an initial step to develop simpler techniques to screen/evaluate crude oils that posses natural hydrate anti-agglomerants and reduce the need for high-pressure tests. As shown in this thesis, due to the intrinsic nature of natural anti-agglomerants, non-plugging oils can only avoid hydrate agglomeration up to a pre-determined amount of hydrates formed in the system. Therefore, if hydrate agglomeration cannot be avoided through natural AAs, other hydrate plug mitigation strategies are necessary. This work proposes the use of THIs to control the amount of hydrates formed in a system (i.e., under-inhibition) and re-enable natural hydrate anti-agglomeration. The effect of methanol (i.e, a THI) and three long chain alcohols on the asphaltene particle size and the non-plugging behavior of crude oils were investigated. It was shown that methanol acted as an asphaltene inhibitor and reduced the asphaltene particle size in a model solution. However, the effect of methanol as an asphaltene inhibitor is diminished in the presence of a free water phase. The decrease of the asphaltene particle size in solution due to methanol addition correlated, for the few oils tested in this work, to an increased hydrate plugging tendency. Therefore, if there is a need to under-inhibit a non-plugging oil system, short-chain alcohols may result in extensive agglomeration and may not be a viable THI option. This work used primarily rocking cells, which are an industry standard, to assess hydrate agglomeration. However, current laboratory hydrate agglomeration screening techniques implemented in the industry (including rocking cells) are qualitative and lack mechanistic understanding of hydrate anti-agglomeration. Therefore, in this thesis work the use of a high-pressure autoclave equipped with imaging probes was also used as an alternative to quantify hydrate agglomeration in the presence of AAs, and investigate the mechanisms that lead to a dispersed hydrate slurry. It was observed that different oil phases (i.e., model oil and crude oil) required different AA concentrations in order to achieve a dispersed hydrate slurry. Additionally, steps that lead to a dispersed hydrate slurry varied depending of the continuous phase of the dispersion before hydrate onset (i.e., oil or water continuous). The application of AAs was also studied in systems with high solid (i.e., hydrate) concentration. It was observed that AA systems form an overly viscous slurry if the solid concentration approaches the theoretical maximum packing fraction for non-interacting solid spheres (i.e., 0.57). It was shown that the high viscosity originating from a highly concentrated slurry could be managed through THI under-inhibition with alcohols, without any apparent detrimental effect to the synthetic anti-agglomerant performance in model or in crude oil systems.