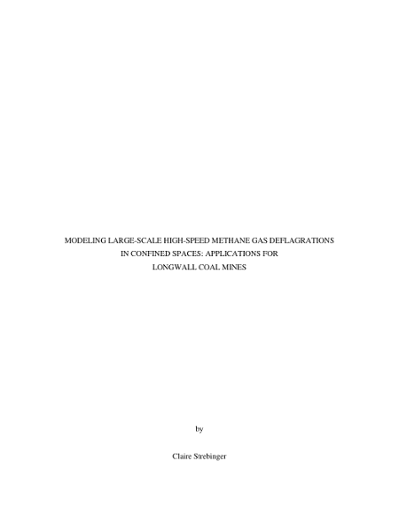 Fires and explosions in confined spaces are extremely dangerous, destroying homes and buildings, damaging infrastructure, and posing a fatal risk to civilians and fire responders. In 2016 alone, The National Fire and Protection Association estimated over a million reported fires, killing 14,650 civilians, 81% of which were home structural fires (Association, 2017). However, fires and explosions have been a problem across many industries including oil and gas, textiles, sugar refineries, and retail. A common denominator of the majority of incidents is that the fires and explosions occurred in confined spaces with complex geometries (i.e. apartment buildings, homes, industrial facilities, pipelines). This is important because explosions in confined spaces can quickly accelerate and result in catastrophic events; and obstacles in the path of the flame could generate a significant amount of turbulence accelerating a high-speed deflagration resulting ultimately in a detonation. This is especially important for the coal mining industry where methane gas explosions are a serious risk in underground mines and can be devastating such as the Upper Big Branch (UBB) explosion in West Virginia in 2010 which killed 29 miners (Page, et al., 2011), the Willow Creek explosions in Utah in 2000 which killed 2 miners and injured 8 more (McKinney, et al., 2001), and the Buchanan Mine in Virginia in 2005 which produced overpressures large enough to knock down miners (Carico, 2005). Although significant work has been done over the years to help mitigate these explosions, they still pose a fatal risk to workers. To gain a full understanding of these gas explosions requires detailed knowledge of mine ventilation schemes, the movement of methane gas in the mine, and high-speed methane gas deflagrations in the presence of various obstacles and run-up lengths. Therefore, the main objective of this research is to build a full-scale, 3D CFD model of a methane explosion in a longwall coal mine and to help assess risk and potential mitigation methods. The knowledge and experience gained in this research can easily be applied to other large-scale fires and explosions such as the 2017 Qishayan tunnel explosion in the Guizhou Province of China which killed 12 workers and injured more (PTI, 2017). The knowledge gained can also help assess the potential risk and provide guidance for stronger prevention strategies against such disasters; as well as guide future designs that minimize the potential for such disasters from occurring. Methane deflagration experiments are performed to build a stronger understanding of how methane flames propagate and interact with obstacles under conditions typically found in a longwall coal mine. Subsequently the data obtained from these experiments is used to validate the combustion model across various scales, providing for a robust and accurate model. Researchers ignited methane-air mixtures in 12cm and 71cm diameter horizontal, cylindrical flame reactors and a rectangular, experimental box with and without obstacles used to simulate various gob characteristics. Measurements of methane flame front propagation velocities, explosion overpressure, and high-speed imaging was performed to develop a comprehensive understanding of flame behavior and provide multiple points of validation for the continual improvement of the CFD combustion model. Experimental results show that methane gas deflagrations in confined spaces are sensitive to the simulated gob characteristics investigated, which includes but are not limited to ignition location, obstacle location, void spacing, and obstacle surface topology. Key experiments were reproduced using a two-dimensional (2D) and three-dimensional (3D) CFD models and results demonstrate the ability of the model to capture methane flame propagation trends seen in experiments, matching maximum flame front propagation velocities within 7.5% in some cases. The models predict flame acceleration across obstacles, capturing the recirculation zone downstream of solid wall-type obstacles and flame propagation through porous gobs. Additionally, the models capture the effects of surface topology on local mixing and demonstrates the importance of modeling the gob area discretely instead of approximating it as Darcy flow porous media when modeling methane flame propagation in this area. After validating the different reactor models in 2D and 3D, the CFD combustion model was combined with a full-scale, 3D ventilation model of an underground longwall coal mine. Using this combined model, researchers have successfully modeled a methane gas explosion in a full-scale mine which is the first time this has ever been modeled. The scenario that was modeled was an ignition at the longwall face, near the headgate drum of the shearer. Results show a large pressure wave traveling at 350m/s leading an expanding flame front with a velocity of 30-35m/s. Results show the pressure wave compressing the air ahead of the flame, increasing the temperature of the unburned gases. This is an important result because increased temperatures can increase combustion rates and accelerate the flame which could potentially transition the flame from a deflagration to a detonation. Results from this study also show that the pressure wave diverts airflow away from the longwall face and into the gob. This is potentially dangerous because the fresh air could mix with methane leaking from the gob area, creating an explosive gas zone in this area. Complimentary to the full-scale, 3D simulation, researchers have also developed full-scale 3D sub-section mine models and a 2D mine model as alternative methods of simulating these large-scale explosions. Results from these models agree with the full-scale simulation and show promise for maintaining model accuracy while reducing simulation time. Based on these results, researchers recommend several ways these models can be used to help develop stronger prevention and mitigation strategies against such disasters, including the design of layout of water sprays and mine layout among some.