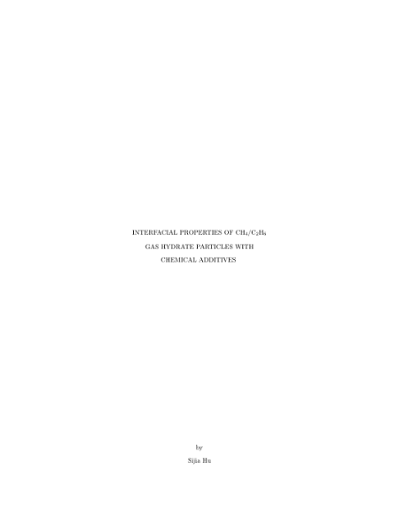 Gas hydrates are ice-like solid compounds comprised of interconnected cages of water molecules, which can encapsulate guest (gas) molecules. Gas hydrates can form in subsea oil and gas flowlines operating at high pressures and low temperatures, which are the conditions that gas hydrates are thermodynamically stable. The formation, agglomeration, and deposition of gas hydrates can lead to plugging of the oil and gas flowlines, resulting in disruption to production, economic losses, and environmental impacts. The conventional hydrate prevention strategy involves using thermodynamic hydrate inhibitors (THIs), however, high concentrations (e.g., 30-40 vol.%) are often required, which makes this strategy costly and environmentally unfriendly. An alternative strategy is to inject anti-agglomerant (AA) surfactant chemicals into the flowline to reduce hydrate agglomeration by decreasing the hydrate interparticle cohesive forces, while still allowing hydrates to form. In contrast to THIs, the typical effective dosage of AAs is much lower (e.g., 0.5 - 2 vol.%). In this thesis, a novel method has been developed to evaluate and study AA performance to mitigate hydrate interparticle interactions, and subsequent hydrate agglomeration, using a high-pressure micromechanical force apparatus (HP-MMF). These HP-MMF measurements are performed using low sample volumes in the presence of a liquid hydrocarbon phase at high pressure and low- temperature conditions. This new method addresses an outstanding requirement in the hydrate field to provide a quantitative and reliable AA evaluation technique. Model AAs with known molecular structures and commercial AAs (i.e., quaternary ammonium salts) have been studied using the newly developed approach. The results demonstrate that the HP-MMF is capable of accurately capturing the effect of AAs on reducing gas hydrate interparticle interactions (cohesive forces). These HP-MMF measurements are shown to be consistent with the macroscopic apparatuses, such as industrial rocking cells and a pilot-scale flowloop. In addition, the HP-MMF approach for AA evaluation has been extended from synthetic AAs to natural AAs in crude oils. The HP-MMF method has been used to investigate the effect of different parameters on interparticle interactions without AAs as baseline tests, such as the type of continuous phase, annealing (hydrate conversion) time, contact (shut-in) time and salinity. It was observed that the gas hydrate interparticle cohesive force was inversely proportional to the annealing time, whereas the force increased with contact time. For longer contact times (> 12 hr), the force may be too large to be measured since the two hydrate particles would adhere permanently to form one large particle. Furthermore, hydrate interparticle cohesive force in the gas phase is higher than that in the liquid hydrocarbon phase. The addition of AAs can reduce the hydrate cohesive force from the baseline to a non-measurable force with increasing concentration of a high-performance AA (e.g., 0.25 vol.% to 2 vol.% of AA1). An under-dosed scenario was also identified where the hydrate cohesive force significantly increased after long contact periods, eventually resulting in a system failure (irreversible interparticle interactions). On the other hand, the hydrate cohesive force remains non-measurable regardless of the contact time when the AA dosage reaches the MED (minimum effective dosage). With knowledge of the detailed structures of AAs, experiments were conducted to investigate the structure-property effects of AA molecules. It was hypothesized that the AA with a longer alkyl chain length can provide a thicker barrier on the gas hydrate surface (to reduce hydrate cohesive force), and the AAs may have a higher packing density at the hydrate surface when the AA alkyl tail length is comparable to that of the liquid hydrocarbon chain. Increasing the salinity can also reduce or eliminate the effect of particle contact time. The HP-MMF method can capture the effect of the AA tail length and the effect of saturated vs. unsaturated tails on hydrate interparticle cohesive forces. The structure-performance relation approach reported in this work could be used to help improve understanding of the molecular mechanisms and properties of AAs and informed selection and development of new AAs. A possible mechanism is presented in this thesis to describe the effect of contact time on hydrate interparticle cohesive force based on the capillary liquid bridge (CLB) model. A dynamic force model adapted from the CLB equation has been proposed to predict the hydrate interparticle cohesive force as a function of contact time, showing close agreement with the experimental data. To better understanding the hydrate wettability, a key parameter in the CLB model, high-pressure contact angle measurements have been also performed. The data obtained in the liquid hydrocarbon (and the dynamic force model) has been applied to the transport and kinetic models incorporated in multiphase flow software (i.e., CSMHyK coupled to OLGA), and the hydrate risk prediction tool using machine learning. Another outstanding question for the hydrate field is the particle-surface interaction. A gas dominated system may present a higher risk of a hydrate deposit forming on the pipe wall. Therefore, coated pipe surfaces have been applied in this work to reduce the gas hydrate particle-surface interactions in a gas dominated system. It was demonstrated that a superhydrophobic pipe surface can reduce hydrate particle-surface adhesion during a 24 hr test period. Conversely, deposition occurs on an uncoated carbon steel pipe surface in 4 hr.