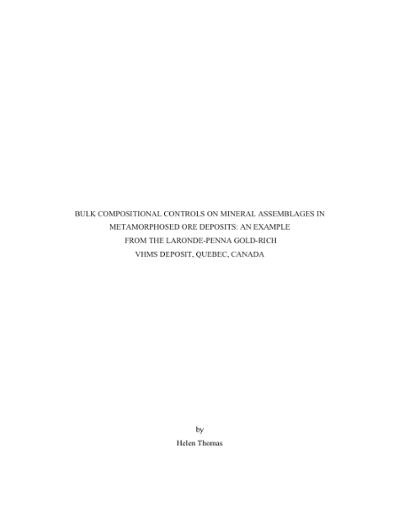 The hydrothermal processes driving alteration during the formation of VHMS deposits, and therefore the overall geochemistry, mineralogy, and geometry of alteration halos, are reasonably well understood. However, less is known about the effects of metamorphism on altered rocks and the resulting metamorphic mineral assemblages that develop in different alteration zones. Exploration for VHMS deposits is typically targeted at the alteration halos, which can extend for considerable distances compared to the deposits themselves. However, in terranes of greenschist grade and above exploration can be complicated by the effects of metamorphism and deformation, which may have changed the original mineralogy and geometry of alteration zones. To address these issues, research targeted the link between pre-metamorphic alteration halo zonation and resulting mineral assemblages by integrating detailed characterization of mineral assemblage and geochemical zoning with phase equilibria modeling of footwall rocks to the LaRonde-Penna VHMS deposit. The work aimed to further our understanding of the bulk compositional controls on mineral assemblage development during metamorphism, and to test whether a phase diagram approach is a viable method to assist future exploration for VHMS deposits in metamorphosed terranes. The LaRonde-Penna Au-rich VHMS deposit (71 Mt of Au at 3.9 g/t), located in the southern Abitibi greenstone belt in Quebec, Canada, is a well-characterized metamorphosed VHMS deposit. Two transects through the altered rhyodacitic-rhyolitic footwall to the main (20N) ore lens were selected, with each transect preserving contrasting mineral assemblages that have previously been interpreted to reflect different alteration types. Within Transect 1, garnet-bearing, aluminosilicate-absent assemblages show an increase in size, abundance, and Mn content of garnet, inferred to reflect increased alteration intensity as the ore lens is approached. Alteration intensity in the footwall area of Transect 1 is characterized by increases in Mn, Fe, Mg, and K, and decreases in Si, Na, and locally Ca. In Transect 2, aluminosilicate-bearing assemblages with or without garnet and staurolite are developed in altered rocks, and assemblages show a broad increase in porphyroblast size and intensity of schistosity as the ore lens is approached. Alteration intensity in the footwall in Transect 2 is similarly characterized by increases in Fe, Mg, and K, and decreases in Si and Na. Mn is not enriched. The results from this study indicate that garnet stability is distinctly influenced by Mn content and relative proportions of Fe and Mg. In addition, with sufficient enrichment in rock Mn contents, garnet may be stabilized to temperatures as low as ~270°C (in altered metarhyolite), significantly lower than temperatures required to stabilize biotite-bearing assemblages. In addition, biotite-bearing assemblages are stabilized to lower temperatures in rocks with elevated Ti, and the persistence of chlorite to higher temperatures is likely controlled by rock Mg concentrations. The similarity in bulk rock aluminum content between rocks from both transects, despite the high abundance of aluminosilicates in Transect 2 (but absence in Transect 1), indicates that aluminosilicate mineral stability is influenced by bulk compositional factors other than aluminum. Conventional thermobarometry and constraints from P-T pseudosections indicate that peak P-T conditions during metamorphism at LaRonde-Penna were approximately 510-530ºC and 3.8-4.2 kbar, with absolute maximum temperatures constrained by the absence of sillimanite in Transect 2 rocks. Also in Transect 2 rocks, inclusion trails in andalusite define a foliation that is parallel to an external foliation defined by biotite and kyanite (with or without staurolite) that may wrap andalusite porphyroblasts. In addition, sillimanite locally forms fringes on biotite and kyanite. These data support the interpretation that metamorphism progressed along a prograde clockwise loop with a limited excursion into sillimanite-stable conditions. The progression of textures involving multiple mineral assemblages that define foliations in the rocks suggests that the rocks experienced regional metamorphism. This is further supported by the lack of any assemblage zoning with respect to nearby intrusions that would indicate the presence of a contact aureole. Inconsistencies between mineral assemblage and inferred pre-metamorphic alteration zone imply that the mineralogical differences within metamorphosed VHMS deposit footwalls may not be obvious reflections of bulk rock geochemistry. Outcomes from this study confirm the applicability of phase equilibria modeling as a predictive tool to effectively describe the relationship between pre-metamorphic alteration zone mineral assemblages and their metamorphosed equivalents.