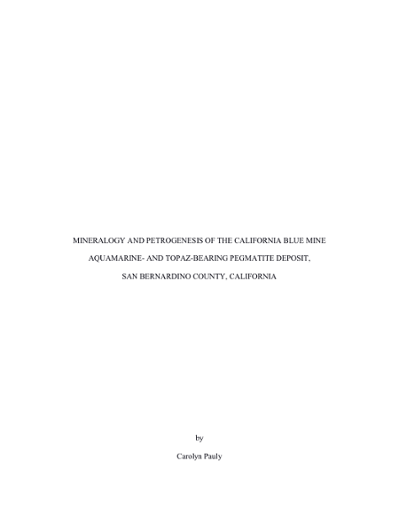 The California Blue Mine Pegmatite is a recently discovered gem aquamarine- and topaz- bearing deposit near Yucca valley in southern California, and is the first significant gem-bearing pegmatite discovered north of the Southern California gem districts (Hunerlach, 2012). Aside from large-scale mapping by the USGS and field work necessary for mining, little research has been conducted on the deposit. The purpose of this thesis is to provide a catalogue of the mineralogy, textures, zoning, and geochemistry of the California Blue Mine pegmatite, and to synthesize these observations into a petrogenetic model. This research combined mineralogical, textural, and geochemical field and hand sample observations with lab analyses, including optical microscopy, field emission scanning electron microscopy (FE-SEM), automated mineralogy, electron microprobe analysis (EMPA), and laser ablation inductively coupled plasma mass spectrometry (LA-ICP-MS). A distinct textural and mineralogical zoning has been identified in the pegmatite, including a border zone, wall zone, intermediate zone, and core zone, as well as several miarolitic pockets. The presence of these zones and pockets indicate a transition from magmatic to hydrothermal processes during pegmatite formation, an assertion which is supported by geochemical and textural data in beryl. Beryl shows three types of textures coinciding with three stages of crystallization: Type i) distinct to gradational concentric core zoning, produced in the intermediate zone by magmatic processes; Type ii) transitional patchy rim zoning, produced in the core zone by magmatic processes and mild metasomatism, and Type iii) pervasive alteration rims caused by intense hydrothermal alteration. Beryl cores are enriched in Al, and rims are enriched in Sc, Na, Fe, and Cs; the coupled replacement of Sc3+ and Fe2+ for Al3+ on the octahedral site with Na+ and Cs+ on the beryl channel site is the most important substitution mechanism in the beryl and defines the transition from Type i) to Type iii) textures. A combination of this octahedral site substitution and coupled substitution of Li+ for Be2+ on the Be tetrahedral site with alkali cations in the channel site characterizes the Type ii) and Type iii) textures. Metasomatic rims of beryl are characterized by enrichment in Li and Cs. The overall evolution of the pegmatite can be subdivided into three stages based on mineral paragenesis and beryl geochemistry. Stage 1 represents crystallization of the quartz, perthitic K-feldspar, albite, biotite, spessartine, and Type i) Al-enriched beryl in the border, wall, and intermediate zones of the pegmatite, produced by fractional crystallization and subsequent melt enrichment in Li, Be, and Sc. Stage II includes the formation of graphically intergrown quartz and albite and Sc-, Na-, and Fe-enriched Type ii) beryl in the pegmatite core by metasomatism from an aqueous fluid separated from the original melt, and Stage III represents the final crystallization of the miarolitic pockets from ponding of the aqueous fluids, producing gem smoky quartz, topaz, and Type iii) beryl enriched in Li and Cs. We conclude that the California Blue Mine pegmatite contains mineralogy similar to NYF-type pegmatites but metasomatic Li and Cs overprinting similar to LCT-type pegmatites, and thus requires more research to classify as either LCT- or NYF-type.