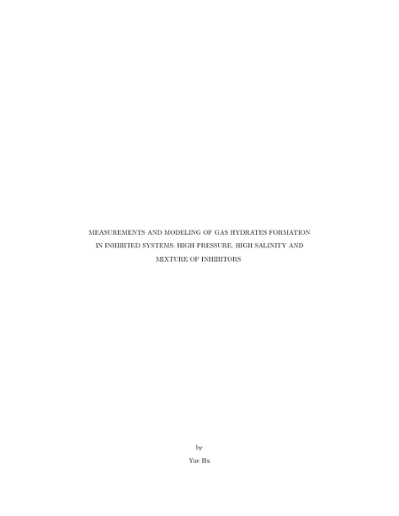 As energy demands continuously increase, oil and gas fields delve into ultra-deep water, which leads to severe operating conditions in terms of pressure, temperature, and water salinity. These conditions pose significant flow assurance challenges, especially gas hydrate formation and scale deposition. Reliable prediction of hydrate phase equilibrium at extreme conditions, in terms of high salinity and high pressure, is necessary for development and operations in ultra-deep water oil and gas production. However, according to the literature review, no open literature studies exist for the hydrate phase equilibria in brine systems above 69 MPa (10,000 psia) due to the challenges associated with experimental designs, safety issues and pitting corrosion problems. As a result, current hydrate prediction tools commonly used are not fully benchmarked and become unreliable at the extreme conditions of very high pressure and high salinity. In this study, experimental data on methane hydrate phase equilibria containing electrolytes, sodium chloride (NaCl), potassium chloride (KCl), and ammonium chloride (NH4Cl) were measured for concentrations up to about 10 wt% at pressure below 10.3 MPa through both isochoric and differential scanning calorimetry (DSC) method with stepwise heating. The results from both methods show good agreement with each other, which proves the accuracy and reliability of experimental methods and measurements. Moreover, the effect of the cation in the electrolyte on the hydrate inhibition strength is identied through the measurements, showing that hydrate inhibition strength by the sodium cation was slightly stronger than that of potassium and ammonium cations due to smaller ionic size for Na+. With validating the reliability of both methods used for measurement of hydrate phase equilibria and identifying the limitation of DSC method in salt concentration, a unique system capable to operate up to 207 MPa has been designed and set up considering safety issues and corrosion problems to measure hydrate dissociation conditions with isochoric method. Due to no data in open literature, the measurements of both structure I and structure II hydrate in single and mixed salts, including NaCl, KCl, CaCl2, MgCl2 and CaBr2, as well as mixed organic inhibitor and salts, such as MEG and CaBr2, become valuable for benchmarking existing prediction tools and improving prediction methods. In addition, the increased stability of methane hydrate at high pressure is discovered through the measurement of methane hydrate phase equilibria with fresh water. It is explained and understood by studying the effect of pressure on macroscopic and microscopic properties of water, methane gas and hydrate through both thermodynamic calculations and molecular simulations. As the interplay of hydrates and salt precipitation is fundamentally important due to the possible co-precipitation of two solids, both phase behavior and kinetics for gas hydrates formation/dissociation are studied by the developed experimental system. The measurements of both three phase (liquid – hydrates – gas) and four-phase (liquid – hydrates – solid salts – gas) equilibria with under-saturated and over-saturated NaCl and KCl solutions, separately, elucidates that the equilibrium boundary moves to lower temperature and higher pressure as the salt concentration increased up to the limit of saturation in the solution, and was unchanged from the conditions at saturation with four phases (liquid – hydrates – solid solids – gas) in equilibrium. Moreover, observed unusual inflection points in the pressure trace as a factor of time for the kinetic experiments, demonstrating that (i) hydrates can still form even with salt precipitated and (ii) the formation of hydrates and salt precipitation are competing effects. Finally, to bridge the gap between the measured data and its applicability, a simple but robust correlation (Hu-Lee-Sum correlation) has been developed to capture the hydrate suppression temperature at a given pressure, for not only high salinity brines, but also systems with mixed thermodynamic hydrate inhibitors (THIs). Due to its inherent property of generality and simplicity, it is a useful tool for the flow assurance engineer to accurately estimate hydrate dissociation temperature at given conditions with the average absolute deviation smaller than 2.0 K. Therefore, this comprehensive study, including measurements and prediction of hydrate phase equilibria, as well as kinetic experiments of hydrate growth rate, at extreme conditions, in terms of high pressure, high salinity and mixture of inhibitors, plays an important role on ultra-deepwater oil and gas production which go beyond hydrate management in pipe flow, such as, setting depth of surface-controlled subsurface safety valve (SCSSV) and identification of effective risk mitigation.