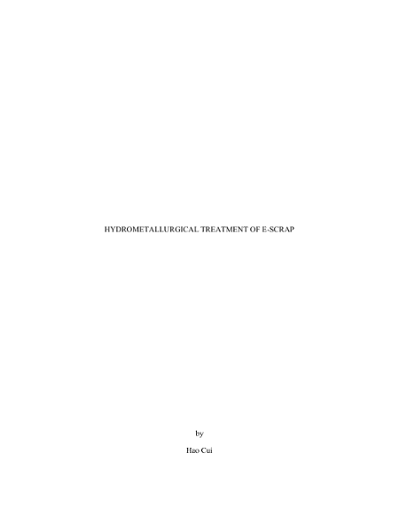 Due to the relatively short life-span of electronic products and rapid revolution of information technology, the production of electronics has increased rapidly in the last two decades. The growth of electronics significantly increases the demand for materials required for electronics manufacturing. Meanwhile, it also leads to an increasing quantity of e-waste. An appropriate management of e-waste does not only facilitate the material demand from mining, but also prevents the contamination of hazardous substances from e-waste, given that e-waste contains a variety of metallic and non-metallic elements, such as silver, gold, lead, copper, and chlorinated and brominated substances. Printed circuit boards, the key components of electronic devices, are, in their simplest form, a mixture of woven glass reinforced resin and multiple types of metal, and are currently recycled by pyrometallurgy, along with other e-waste products. However, to achieve an economically feasible operation, the pyrometallurgical process is conducted on a large scale. Compared to pyrometallurgy, a hydrometallurgical process can be operated on a smaller scale. Given that waste printed circuit boards contain bromine, and bromine leaching has fast kinetics, this research investigated the feasibility of using bromine to hydrometallurgically recover valuable metals from waste printed circuit boards. The sample characterization indicated that copper was the primary metallic element present in printed circuit boards, and precious metals, such as silver, gold, and palladium, were also found in waste printed circuit boards. Prior to the bromine leaching, a series of physical separations (flotation, heavy liquid separation, shaking table, and electrostatic separation) were conducted to pre-concentrate shredded waste printed circuit boards in order to reduce the consumption of leaching reagents. Unfortunately, the physical separation did not show an effective separation because of the poor liberation and the significant loss of precious metals. By investigating the effects of bromine and sodium bromide concentrations, reaction time, temperature, and agitation speed, it was found that more than 95% of copper, silver, lead, gold and nickel could be dissolved simultaneously under the optimal conditions: 50g/L solid/liquid ratio, 2.4kg NaBr/kg PCBs, 0.8L Br2/kg PCBs, 1L HCl/kg PCBs, 400RPM agitation speed and 23.5 °C for 10 hours. The kinetic calculation for the bromide leaching of gold from printed circuit boards demonstrated that the reaction order was 0.55 with respect to the bromine concentration, and 0.16 with respect to the bromide concentration. The activation energy was found to be 26,570 J/mole. Moreover, based on the literature survey, a flowsheet was proposed to recover each valuable element from the leaching solution. Eventually, an economic feasibility study was conducted and showed that this process was, unfortunately, not economically feasible, mainly due to the high reagent cost. The high reagent cost could be further attributed to the high unnecessary consumption of bromine and sodium bromide in dissolving base metals. Therefore, further studies can be conducted to investigate a two-step leaching process to first remove base metals using inexpensive reagents, and then dissolve precious metals by bromine and sodium bromide.