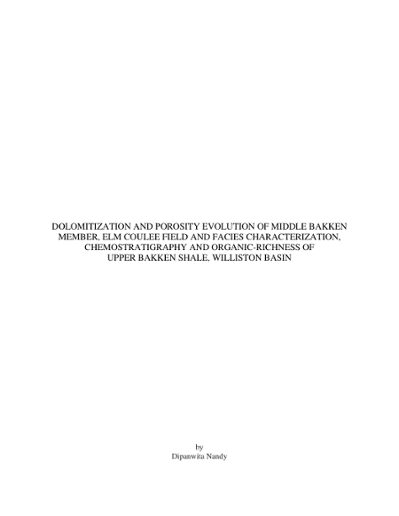 This thesis is focused on improving the current geological understanding of the Bakken Shale Play, which currently produces with a rate of about 1 million BOPD and contributes about 12% of the total indigenous oil production of the US. In the first part of the thesis, I investigate the effect of dolomitization on the total porosity, pore architecture and pore-size of the Middle Bakken Member (MBM), which is one of the major producing intervals of the Bakken Shale Play. The second part of this research is focused on the organic-rich Upper Bakken Shale (UBS), which along with the Lower Bakken Shale, is the source rock interval for the Bakken Petroleum System. However, the potential of UBS as a future production interval is highlighted by the recent exploration successes and historical examples of production, which emphasizes the need for a comprehensive characterization of the UBS with respect to its facies and internal stratigraphic framework. I have investigated various aspects of the UBS, such as its facies types, their distribution in the basin and sedimentary processes. Moreover, chemostratigraphy was used to provide an internal stratigraphic framework for the UBS. The third part of this study is focused on understanding the role and interplay of the factors that controlled the organic-richness in UBS. The first part of this research, which is focused on the MBM of the Elm Coulee Field, is based on the results of core description, thin section and scanning electron microscope (SEM) petrography, stable isotope of carbon and oxygen, routine core analysis (RCA), X-Ray Diffraction (XRD) and Mercury Intrusion Porosimetry (MIP). The relationships between dolomite content, total porosity, and pore size suggested that the porosity evolution in the MBM is closely linked with the dolomitization process. An increase in the dolomite content up to 60 wt.% results in an overall increase in the development of intercrystalline pores, total porosity, pore size, and dolomite crystal size. An increase in dolomite content above 60 wt.% marks overdolomitization of the MBM, which results in an increase in the size of dolomite crystals, and a decrease in both total porosity and pore size. My findings suggest that MBM of the Elm Coulee Field was dolomitized by seepage-reflux of the mesohaline brine. I propose that in the MBM, the dolomitization process involved an open-system volume-for-volume replacement of precursor calcite by dolomite, and the degree of dolomitization was dependent on the external supply of Mg2+and (CO3)2- ions. Dolomitization by volume-to-volume replacement results in an increase in the pore size, while the total porosity remains the same during the process. In MBM, an increase in porosity with an increase in dolomite content resulted from a relatively less compaction of dolomite-rich intervals, in comparison to the calcite-rich intervals, because the later is more susceptible to compaction. In the overdolomitization stage, dolomite crystals form interlocking fabrics, which in turn resulted in a decrease in the total porosity and pore size due to dolomite cement overgrowth. I identify six lithofacies of the UBS from core description and thin-section petrographic study; however, 95% of the UBS consists of the three main facies: siliceous mudstone, massive to finely laminated silt-bearing mudstone, and macrofossil-bearing silt-rich mudstone. Three regionally correlatable chemostratigraphic packages (bottom to top): Sub-unit 1a, 1b, and Unit-2 were identified in the UBS. My study indicates that the maximum flooding surface is located in sub-unit 1b, near the contact of Unit-2 and sub-unit 1b. The results of this research show that during the deposition of the UBS, the basin was semi-restricted, had stratified water column, and the regeneration of the biolimiting nutrients such as P and N was one of the primary sources of nutrients. Moreover, the redox condition, paleoproductivity, and the influx of detrital and biogenic sediments varied during the deposition of the UBS, primarily due to a relative change in the sea level. This resulted in a temporal variation in TOC and the deposition of four distinct sub-units in the UBS (bottom to top): 1a, 1b, 2a, and 2b. Sub-units 1a and 1b were deposited in a strongly euxinic condition, which existed in the bottom water and extended to the photic zone intermittently. Whereas, during the deposition of sub-units 2a and 2b, the conditions were predominantly sub-oxic to anoxic along the sediment-water interface. Moreover, paleoproductivity was high during the deposition of sub-unit 1a and 1b, and paleoproductivity declined during the deposition of sub-units 2a and 2b.