Exploring the effect of climate perturbations on water availability for renewable energy development in the Indian Wells Valley, California 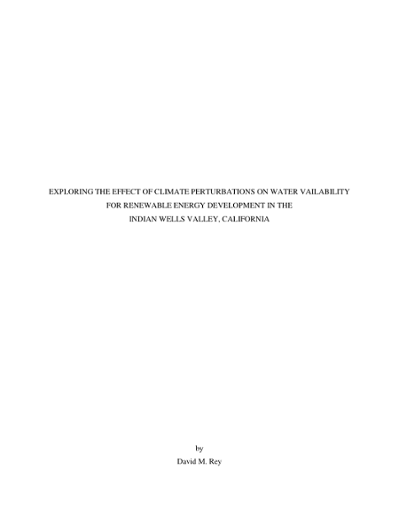 Energy and water are connected through the water-use cycle (e.g. obtaining, transporting, and treating water) and thermoelectric energy generation, which converts heat to electricity via steam-driven turbines. As the United States implements more renewable energy technologies, quantifying the relationships between energy, water, and land-surface impacts of these implementations will provide policy makers the strengths and weaknesses of different renewable energy options. In this study, a MODFLOW model of the Indian Wells Valley (IWV), in California, was developed to capture the water, energy, and land-surface impacts of potential proposed 1) solar, 2) wind, and 3) biofuel implementations. The model was calibrated to pre-existing groundwater head data from 1985 to present to develop a baseline model before running two-year predictive scenarios for photovoltaic (PV), concentrating solar power (CSP), wind, and biofuel implementations. Additionally, the baseline model was perturbed by decreasing mountain front recharge values by 5%, 10%, and 15%, simulating potential future system perturbations under a changing climate. These potential future conditions were used to re-run each implementation scenario. Implementation scenarios were developed based on population, typical energy use per person, existing land-use and land-cover type within the IWV, and previously published values for water use, surface-area use, and energy-generation potential for each renewable fuel type. The results indicate that the quantity of water needed, localized drawdown from pumping water to meet implementation demands, and generation efficiency are strongly controlled by the fuel type, as well as the energy generating technology and thermoelectric technologies implemented. Specifically, PV and wind-turbine (WT) implementations required less than 1% of the estimated annual aquifer recharge, while technologies such as biofuels and CSP, which rely on thermoelectric generation, ranged from 3% to 20%. As modeled groundwater elevations declined in the IWV, the net generation (i.e. energy produced – energy used) of each renewable energy implementation decreased due a higher energy cost for pumping groundwater. The loss in efficiency was minimal for PV and wind solutions, with maximum changes in the drawdown being less than 10 m; however, for CSP and biofuel implementations drawdowns over 50 m were observed at the pumping well, resulting in electrical generation efficiency losses between 4% and 50% over a two-year period. It was concluded that PV would be the best balance between water and land-use for the IWV, or other groundwater dependent Basin and Range settings. In areas with limited water resources but abundant available land for implementation, WT solutions would have the smallest hydrologic impact. The impact of renewable scenarios was highly variable across and within differing fuel types, with the potential for larger negative impacts under a changing climate in areas with no perennial surface water.