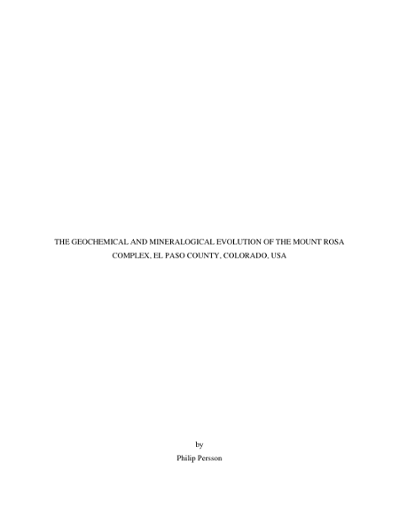 The ~1.08 Ga Pikes Peak Batholith is a type example of an anorogenic (A)-type granite and hosts numerous late-stage sodic and potassic plutons, including the peraluminous to peralkaline Mount Rosa Complex (MRC), located ~15 km west of the City of Colorado Springs in Central Colorado. The MRC is composed of Pikes Peak biotite granite, fayalite-bearing quartz syenite, granitic dikes, Mount Rosa Na-Fe amphibole granite, mafic dikes ranging from diabase to diorite, and numerous rare earth (REE) and other high field strength element (HFSE; e.g. Th, Zr, Nb) rich Niobium-Yttrrium-Fluorine (NYF)-type pegmatites. The aim of this study is to trace the magmatic evolution of the Mount Rosa Complex in order to understand the relationship between peraluminous and peralkaline rock units and concomitant HFSE enrichment and mineralization processes. Field work, petrography, SEM-based methods, whole rock geochemistry, and electron probe micro-analysis (EPMA) of micas was performed on all rock units to determine their textural, mineralogical and geochemical characteristics. Early peraluminous units such as the Pikes Peak biotite granite and fayalite-bearing quartz syenite contain annite-siderophyllite micas with high Fe/(Fe + Mg) ratios, and show relatively minor enrichments in REE and other HFSE compared to primitive mantle. Granitic dikes show a crude radial geometry around the inferred intrusive center, contain Al-rich siderophyllite mica, and are relatively depleted in HFSE. The Mount Rosa Na-Fe amphibole granite is very heterogeneous in outcrop (sill-like bodies, blobs, and dikes), as well as mineralogically and texturally variable, and includes large pegmatitic areas as well as coarse and fine-grained enclaves. End-member annite is enriched in Na, K, and F, and the Mount Rosa granite is enriched in REE and other HFSE compared to primitive mantle and earlier rock units. Mafic dikes contain biotite which is more Mg-rich versus other MRC biotites, and show a strong whole rock geochemical enrichment in REE, Zr and other HFSE. While Type-(I) pegmatites are mineralogically simple with irregular contacts, Type-(II) pegmatites are mineralogically complex and have sharp intrusive contacts. A sample transect across an ~80 cm thick, well-zoned Type-(II) pegmatite shows low F + Cl contents in biotite from the contact zone (0.30 a.p.f.u. Cl + F) with increasing concentration of F + Cl in micas towards the core. Biotite from the wall zone, which is mineralogically similar to the Mount Rosa granite, contains 2.5 a.p.f.u. F + Cl, whereas polylithionite-trilithionite from the core zone, which which is associated with cryolite (Na3AlF6) pods, fluorite, and arfvedsonite psuedomorphs, shows extremely high concentrations of F + Cl (up to 7.0 a.p.f.u.) While early units such as the Pikes Peak granite, fayalite-bearing quartz syenite, and granitic dikes appear to have a similar parental melt to the overall Pikes Peak Batholith, the Mount Rosa granite, with its peralkaline chemistry and strong outcrop, textural and mineralogical heterogeneity may be related to the separation of an immiscible peralkaline melt late in the magmatic evolution of the complex. Mafic dikes show characteristics of both early peraluminous units (whole rock enrichment in and mineralogy reflecting compatible elements such as P and Ba), as well as later peralkaline units (strong enrichment in incompatible elements such as Zr and REE; abundant fluorite and albite), and have a less clear magmatic relationship to either the Pikes Peak or Mount Rosa granite parental melts. Pegmatites are interpreted to represent the very last melt after the crystallization of Mount Rosa Na-Fe amphibole granite. Three major alteration events were identified in the MRC: (I) early albitization, which is most intense around the Mount Rosa granite, (II) an acidic aegirinization/hematization stage which replaced Na-Fe amphibole with aegirine and all mafic silicates by Fe oxides, and (III) a hydrothermal Ca-F metasomatism stage in which magmatic minerals were altered and replaced by Ca-F minerals. Incompatible elements were likely re-mobilized by late F-rich hydrothermal fluids in stage III which precipitated minerals such as REE fluorcarbonates and hydrothermal zircon in Type-(II) pegmatites.