Geologic controls on alteration and mineralization at the Wharf mine, South Dakota 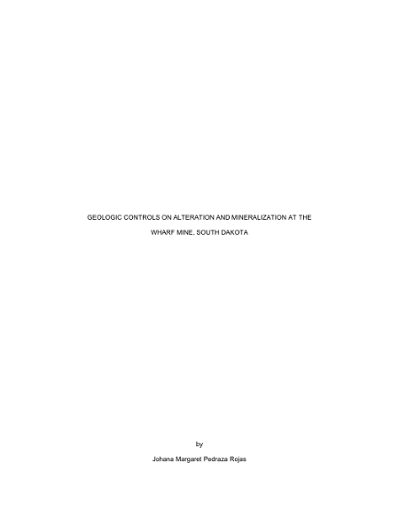 The Wharf mine is located within the Bald Mountain district in the Lead-Deadwood Dome in the northern part of the Black Hills, South Dakota. Wharf comprises several contiguous gold and silver deposits, characterized by structurally controlled and disseminated ore in sedimentary and intrusive rocks. Despite 33 years of mining at Wharf and over a hundred years of mining in the district, the relationship between magmatism and mineralization has remained unclear. New exposures and data allowed detailed characterization of the host rocks, alteration and mineralization in the Deep Portland, Trojan and Harmony areas, enabling development of a genetic model for the Wharf deposits. The intrusive rocks in Wharf include dikes and sills of phonolite, trachyte, quartz-trachyte, quartz-alkali-feldspar-trachyte, and rhyolite. The intrusions have been affected by alkalic-metasomatism, silicic, phyllic, carbonate and argillic alteration and are weakly mineralized. In the intrusive rocks, the intensity of K-metasomatism is positively correlated with Ag, As, Pb, Tl and U concentrations, whereas there is no significant correlation between K-metasomatism intensity and Au, Cu, Sn, Te or Zn. The sedimentary host rocks at Wharf comprise the lower and upper members of the Deadwood Formation, with most ore concentrated in the lower member and structures crosscutting the upper member. The sedimentary host rocks have been affected by silicic and carbonate alteration styles. The whole deposit has been affected by supergene alteration. Five stages of alteration occurred during formation of the Wharf deposits. Stage 1 comprised fenitization of the intrusive rocks during the late stages of magmatism. A hydrothermal system developed during stage 2, when orthoclase was replaced with albite, adularia and quartz in the intrusive rocks, and calcite precipitated along fractures. Minor mineralization occurred at this time, including galena, acanthite, pyrite, and marcasite, and potentially some electrum and Au-tellurides. At the same time at shallower depths, phyllic alteration occurred in the intrusive units at varying intensities, characterized by the association of muscovite, quartz and pyrite. During stage 3, phonolites and trachytes, phyllically altered rocks and fractures were argillically altered at shallow depths, characterized by interlayered clays, illite, chlorite and smectite. Some acid leaching of intrusive rocks and the emplacement of hydrothermal breccias also likely occurred at this time. During stage 4, carbonate alteration occurred as disseminations and along fractures in intrusive and sedimentary rocks with varying intensity, associated with fluorite and pyrite. At this time, ore concentrations of native Au, Au tellurides and electrum precipitated as disseminations in the lower Deadwood Formation, in fractures in all rock types, and in vugs in the intrusive rocks. Base metal minerals, such as galena, sphalerite, molybdenite, argentotennantite [(Ag,Cu)10Zn2Sb4S13], and chalcopyrite, also precipitated in vugs in the intrusive rocks although not at economic concentrations. In stage 5, supergene alteration was characterized by the precipitation of alunite, jarosite, barite and LREE phosphates and the remobilization of Au and Ag in fractures and vugs. Supergene mineralization was characterized by acanthite, native silver, gold and copper, iodarggite [AgI], mckinstryite [(Ag,Cu)2S], mimetite [Pb5(AsO4)3Cl], and calderonite [Pb2Fe(VO4)2(OH)]. The data collected in this study indicate that the deposits at Wharf formed in the epithermal environment, following emplacement of the alkalic and sub-alkalic sills and dikes. The hydrothermal system responsible for the formation of the Wharf deposits appears to have been dominated by chloride and CO2 rich-, near neutral, low to intermediate sulfidation state fluids.