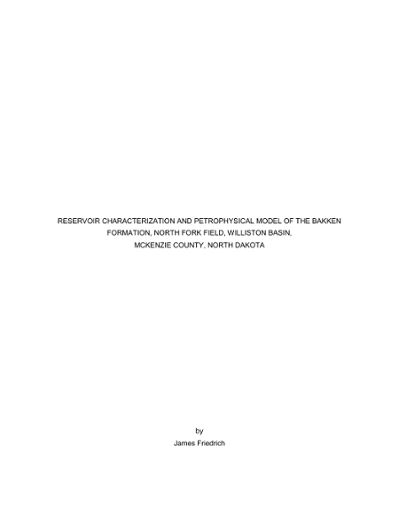 The Williston Basin is an intracratonic sedimentary basin extending across parts of South Dakota, North Dakota, and Montana as well as the Canadian provinces Alberta, Saskatchewan, and Manitoba. During the last decade, the Williston Basin has become one of the most important petroleum producing basins in the United States. This is largely due to the increased development of reservoirs in the Bakken and Three Forks formations. North Fork field is located in McKenzie County in western North Dakota, south of the Williston Basin depocenter and between the southern end of the Nesson anticline and the northern end of the Billings Nose. Since 2007, 40 wells – all horizontal – have been completed in the Bakken Formation or the upper part of the Three Forks Formation. As of January, 2015, North Fork field has produced 932,019 bbls of oil and 391,715 mcf of gas from the Three Forks and 3,650,575 bbls of oil and 5,977,544 mcf of gas from the Bakken. Essentially all of the Bakken production has occurred since 2007. Despite the high level of drilling activity in this field during the last seven years, significant potential remains for development, especially in the central part of the field. Detailed reservoir characterization and accurate petrophysical models are always important to maximize the economic development of petroleum reservoirs; however, the recent decline in oil prices has heightened this necessity, even in a continuous accumulation such as that in the Bakken petroleum system. This study evaluated the stratigraphy and petrophysical characteristics of the Middle Bakken in and around North Fork field in order to facilitate a deeper understanding of the controls on oil distributions within the Middle Bakken. Routine core analyses, XRD data, MICP data, thin sections, SEM, and core descriptions were used to characterize the mineralogy, texture, porosity, pore geometry, and stratigraphy of the various lithologic facies in the Middle Bakken. These data were then tied to available electronic well logs to evaluate the distribution and thicknesses of these facies. A petrophysical model was developed for the Middle Bakken, including an in situ permeability-porosity relationship, a new method for estimating shale volume, a new method for estimating fracture porosity, and a method for estimating Archie’s cementation exponent that is based on observable rock properties. Estimated fracture porosities suggest that microfracturing in the Middle Bakken is controlled by proximity of structural features, pore pressures (hydrocarbon generation), and regional fracture lineaments, with regional fracture lineaments being the most significant in this study area. Calculated water saturations indicated that secondary hydrocarbon migration has occurred within the Middle Bakken, with structural highs, such as the Nesson Anticline, exhibiting elevated oil saturations. Hydrocarbon pore volume maps indicate that the most oil rich areas are those areas where regional fracture lineaments intersect structural highs, as occurs at the southern end of the Nesson Anticline in the central part of the study area.