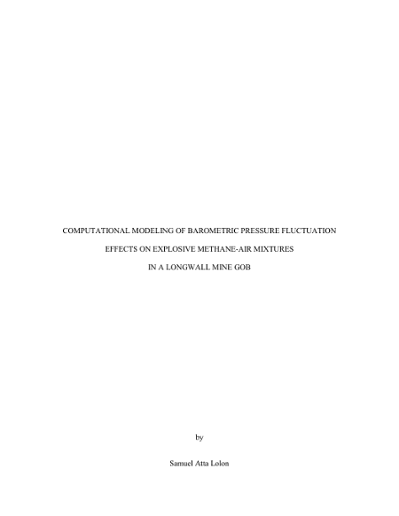 The coal mining industry remains a major player in electrical power generation for the United States. The U.S. Energy Information Administration (EIA) reported that coal made up the second largest share after natural gas, approximately 30%, of the total electricity generated in 2016, further, it projected to remain significant for the next several decades together with natural gas and renewable sources (U.S. Energy Information Administration, 2017). Longwall mining has become more frequently used for extracting coal seams underground due to increased safety and higher productivity (EMFI, 2010) through improved mechanization and mining system automation. In the longwall method, the overlying strata are allowed to cave behind the working face after the coal is extracted, creating a porous zone known as gob. Due to its caving nature, the gob is inaccessible and presents a safety concern because of the potential methane and explosive mixture accumulation occurring in this zone. There have been a great number of mine fires and explosions in the United States and other countries that suggest the existence of an explosive mixture or Explosive Gas Zone (EGZ) in bleeder-ventilated longwall gob (Loane et al., 1975; Lynn et al., 1986; McKinney et al., 2001; Dziurzynski and Wasilewski, 2012; Brune, 2013). These events indicated that EGZs must have existed inside and around the perimeter of gobs. The risk of mine explosion will increase if these EGZs flow out from the gob to the surrounding mine entries. As mine pressure is influenced by atmospheric pressure, the fluctuation of outside pressure can disturb the pressure differential between the internal and external gob which consequently can either escalate or lessen the EGZ outgassing from the gob. A number of studies have related major mine explosions to abrupt barometric pressure changes in the United States, South Africa, Australia, and Poland (Hosler, 1948; Boyer, 1964; Kissell et al., 1973; Fauconnier, 1992; Hemp, 1994; Wasilewski, 2014; Belle, 2014; and Lolon et al., 2015). These disastrous mine explosions seem to happen frequently in stormy weather, which occur during late fall and winter seasons in the United States. Numerical modeling using computational fluid dynamics (CFD) is considered the best suited approach for simulating methane air flow and mixture in the gob due to its inaccessibility, which limits the availability of gob data. CFD modeling has been widely used for mine ventilation analysis around the globe (Brunner et al., 1995; Wala et al., 1997; Balusu et al., 2002; Calizaya et al., 2004; Lowndes et al., 2005; Yuan et al., 2006; and Ren, 2010). CFD models were developed in this research to analyze the formation of EGZ in the bleeder-ventilated gob, the effects of various magnitudes and rates of barometric pressure change on the EGZ and methane outgassing, and the potential location of the outgassing. The model was built based on an actual supercritical longwall mine in the western United States, characterized by the condition of no overlying strata hanging above the shields. The ventilation parameters and gob permeability characteristics were obtained from cooperating mines which had been studied by earlier researchers in this project (Worrall, 2012; Wachel, 2012; Marts, 2015; Gilmore, 2015). Other parameters not available in the cooperating mine such as location and operating pressure of methane source, and pressure drops of regulators and other ventilation controls were obtained from reliable references or similar studies, or calculated to be deemed reasonable. The outputs of CFD modeling indicated fringes of EGZ within the gob and several back-end crosscuts on the tailgate return under static atmospheric pressure condition, confirming an observation reported by several explosion investigations and studies of EGZ existence within the gob (Elkins et al., 2001; McKinney at al., 2001; Cario, 2006; Woodward and Sheffield, 2008; Page et al., 2011; Brune, 2013). The CFD models show that, under normal bleeder ventilation systems, it is very likely that EGZ is formed within the gob as a result of ventilation air ingressing into the gob and mixing with methane. The CFD models further identified that the methane and EGZ outgassing occurs in barometric pressure fall scenarios. The rise of atmospheric pressures is a preferable situation with respect to EGZ outgassing; CFD models demonstrated decreasing EGZ volumes within the gob and tailgate return crosscuts associated with barometric or external pressure increases. Therefore, this research focused more on the barometric fall scenarios than the cases where it increased. The hypotheses of gob breathing and outgassing under various scenarios of pressure changes were also proved by analyzing the modeling outputs. The amount of EGZ outflow depended on the magnitude of the pressure drop. The rate of outgassing was controlled by the rate of pressure fall. The location of EGZ outgassing was mainly in the tailgate and bleeder returns. Gob permeability is major assumption in this modeling, thus a parametric study is presented to discuss the effect of permeability on the base EGZ cases. The study shows larger EGZ volume within the gob with higher permeability. Higher permeable gob allowed more air ingression into the gob which, mixed with methane, resulted in larger EGZ. At the end, the results were validated against data provided by cooperating mines and also compared with published data. The main objective of this research is to provide the mining industry, its stakeholders, and the body of knowledge with a better understanding of gob breathing, EGZ outgassing and the methane explosion risk associated with barometric pressure changes and, ultimately, recommendations of best practices to prevent outgassing from resulting in a mine explosion. The best practices recommended include the risk matrix, a continuous monitoring system, and Gob Ventilation Borehole (GVB) application.