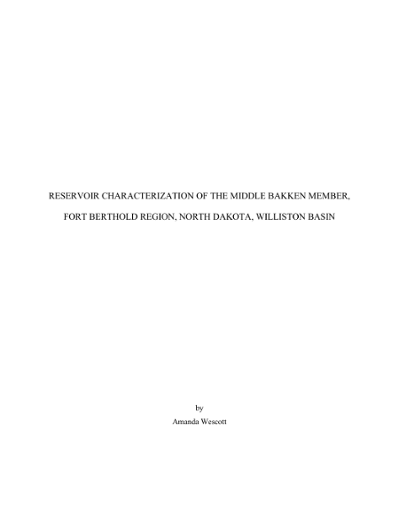 The Bakken Formation of the Williston Basin is a highly productive source-reservoir system. It has produced substantial quantities of oil, specifically from greater Parshall Field partly on the Fort Berthold Indian Reservation (FBIR) of western North Dakota. The MBM is composed of mixed carbonate-clastic lithologies representative of distinct depositional settings: the ‘lower Middle Bakken’ represents an open marine setting, the Middle Bakken represents a shoal unit, and the ‘upper Middle Bakken’ represents a marine shelf to open marine setting. Over the past several years exploration has expanded from the southern tip of Parshall Field into the southern edge of Mountrail County and the northern part of Dunn County. Located in the center of the FBIR, these counties show great production potential. A baseline reservoir characterization and diagenetic description of the region was developed and compared to the nearby prolific Parshall and Elm Coulee Fields. Special emphasis is placed on the MBM, the main reservoir unit and horizontal drilling target for the study area. Enerplus has supplied five cores: the Danks, Henry Bad Gun, Hognose, Pumpkin, and Roberts Trust. Additionally, QEP Resources supplied the MHA 1-18h-150-90 core, near the ‘Line of Death’ (LOD), where MBM production becomes sub-commercial updip to the east. Facies descriptions and core analysis were completed for all six cores to outline possible reservoir facies. Next, an integrated petrographic analysis using x-ray diffraction (XRD), routine core analysis (RCA), Mercury injection capillary pressure (MICP), field emission scanning electron microscope (FESEM), thin section (plain polarized, cross polarized, and epifluorescence light), and computed tomography (CT) images helped to define parameters affecting reservoir quality and develop a diagenetic sequence for the FBIR. Finally, a hydrocarbon pore volume map was developed for the FBIR using PETRA software, to underscore the eastern economic limit of production. Initial observations and conclusions suggested that specific facies acted as primary and secondary reservoir units within the MBM. However, the integrated petrophysical analysis determined that reservoir quality is not defined by traditional parameters. Instead, reservoir quality is directly related to diagenesis, which is not facies preferential. A dynamic precipitation-dissolution process helped preserve porosity and permeability within the MBM. The primary pore network is comprised of secondary slot pores (dissolution pores). These pores show decent permeability (qualitatively), however methods such as RCA and MICP underestimate permeability. Natural fractures were not observed in the dataset, but proven production suggests that the MBM is capable of supporting induced fractures during hydraulic stimulation, further enhancing permeability and reservoir quality at a macroscale. The hydrocarbon pore volume map suggests that values of greater than 0.60 are necessary for wells to be commercially economic. Although all highly prolific fields, parameters effecting reservoir quality vary between Parshall, Elm Coulee, and the FBIR. Elm Coulee production is highly influenced by dolomitization (up to 60%), as well as dedolomitization; both increase porosity and permeability. Similarly, reservoir quality at Parshall Field is related to mineralogic controls. Kowalski (2010) proved a relationship between quartz and dolomite, and microfracturing and porosity. However within the FBIR, a relationship between dolomitization and increased porosity was not established. Instead, the greatest relationship was with calcite and porosity. The FBIR is considered a calcite regime, in which the presence of calcite helped to strengthen the MBM against compaction, preserving porosity and permeability. Furthermore, open natural microfractures were not observed within the dataset as in Parshall Field.