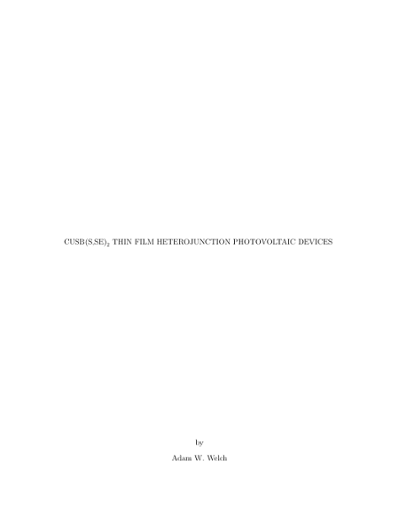 Thin film heterojunction solar cells based on CuSb(S,Se)2 absorbers are investigated for two primary reasons. First, antimony is more abundant and less expensive than elements used in current thin film photovoltaics, In, Ga, and Te, and so, successful integration of Sb based materials offers greater diversification and scalability of solar energy. Second, the CuSb(S,Se)2 ternary is chemically, electronically, and optically similar to the well-known, high efficiency, CuIn(S,Se)2 based materials. It is therefore postulated that the copper antimony ternaries will have similar defect tolerant electronic transport that may allow for similar highly efficient photoconversion. However, CuSb(S,Se)2 forms a layered crystal structure, different from the tetrahedral coordination found in conventional solar absorbers, due to the non-bonding lone pair of electrons on the antimony site. Thus examination of 2D antimony ternaries will lend insight into the role of structure in photoconversion processes. To address these questions, the semiconductors of interest (CuSbS2 & CuSbSe2) were first synthesized on glass by combinatorial methods, to more quickly optimize process condi- tions. Radio-frequency (RF) magnetron co-sputtering from Sb2(S,Se)3 and Cu2(S,Se) targets were used, without rotation, to produce chemical and flux graded libraries which were then subjected to high throughput characterization of structure (XRD), composition (XRF), con- ductivity (4pp), and optical absorption (UV/Vis/NIR). This approach rapidly identified processes that generated phase pure material with tunable carrier concentration by apply- ing excess Sb2(S,Se)3 within a temperature window bound by the volatility of Sb2(S,Se)3 and stability of the ternary phase. The resulting phase pure thin films were then incor- porated into the traditional CuInGaSe2 (CIGS) substrate photovoltaic (PV) architecture, and the resulting device performance was correlated to gradients in composition, sputter flux, absorber thickness, and grain orientation. This combinatorial work was complimented by individual measurements of photoluminescence (PL), capacitance-voltage (CV), external quantum efficiency (EQE), terahertz (THz) spectroscopy, and photoelectrochemical (PEC) measurements. CuSbS2-based libraries produced devices with just 1% power conversion efficiency, mainly limited by high levels of recombination associated with high density of shallow trap states. Conversely, the selenide variant showed more promise, with initial cells producing signifi- cantly more photocurrent, nearly 60% of the theoretical maximum, and likewise 5% efficient devices, mainly due to fewer trap states. However, the selenide is still limited by short carrier diffusion lengths, therefore demonstrating that structure does seem to play limiting role in photoconversion processes. Overall, the CuSb(S,Se)2 material system is only likely to merit further exploration if it can be incorporated into an alternate device structure less dependent on collection by diffusion. There is a small possibility that oriented selenide films with anisotropic carrier lifetimes could improve performance, though this is unlikely considering initial oriented sulfide films did not demonstrate much improved performance. This work demonstrated the utility of the combinatorial device fabrication applied to the search for new, scalable photovoltaic materials. An innovative chemical system was quickly explored in-depth and optimized for devices; continued efforts of this type are likely to produce better materials, or at the very least, quickly expand the library of well-scrutinized photovoltaic materials.